The Race is on for the Brewer's Cup 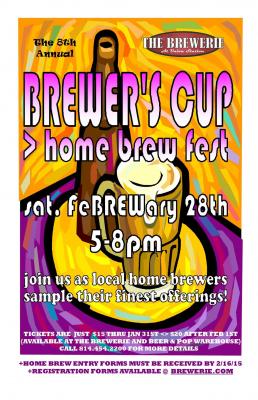 If you wonder what the future of beer tastes like, wonder no more. This Saturday The Brewerie at Union Station will host its 8th Annual Brewer's Cup, an event that brings together the best home brewers in the region.

If you're thinking to yourself, "why would I pay $20 to drink beer some guy made in his basement?" I'll tell you why. It's alchemy that renders pure gold when done well, and most of what's great about brewing in Erie and the region right now began at a previous Brewer's Cup.

"We're looking at over 60 brewers and more than 70 beers," says Brewerie owner Chris Sirianni. "We started as a platform for people to network and to get feedback on their beer, but it's honestly become one of the more unique brewfests that we do. As a consumer, you're going to have beer that you never had before and you might never have again. And you might get to meet the guy who's going to start the next Lavery Brewing or the next Ale Works."

The Brewer's Cup runs from 5pm-8pm this Saturday. More information is available at Brewerie.com.