Another new review by our food critic. 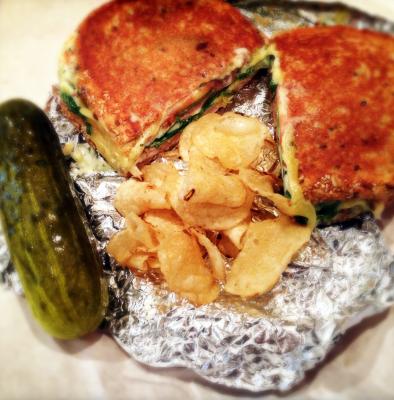 A less than ideal location up by the Millcreek Mall serves as the home to a surprisingly good little gourmet sandwich shop known as Picasso's. It's easy to miss on your way through the Starbucks drive-thru, especially since this particular storefront has housed multiple vendors in the past. But one visit to this shop should have any eater coming back to the area for a sandwich instead of a latte.

It's a small and friendly environment that serves as a gallery space not just for featured artists, but also for an extensive menu of sandwiches that one is not likely to find anywhere else in this town. The price points are completely reasonable, if not lower than some other sandwich venues, with the most expensive item maxing out at only $7.99, as well as the option to order only half a portion, bringing that price point down even lower.

Upon entering the shop – especially as a first- time visitor – I was overwhelmed by the giant chalkboard menu, but the eagerness of the staff to simply offer assistance allowed for a quick acclimation to the scene. If the staff had nametags I would namedrop two particular young ladies who were not only friendly, but also knowledgeable about the menu and the ingredients in question. As for the time spent waiting for my meal, let's just say that I barely had time to make a doodle on the chalkboard-painted tabletop before my food was delivered.

Before discussing food options and flavors, I'm going to warn the meat-free eaters out there, along with the even more dietary-restricted vegans, that this menu is very meat-and-cheese heavy. There are three vegetarian signature sandwich options, two of which are primarily cheese. There is, however, a "Build Your Own" option that one could easily get meat-and-cheese-free friendly with. They also offer gluten-free bread for a considerable upcharge ($2) for those with allergies.

It's a small and friendly environment that serves as a gallery space not
just for featured artists, but also for an extensive menu of sandwiches that
one is not likely to find anywhere else in this town.

For the meat lovers, however, options abound, with standouts such as the "DaVinci," which comes with Italian sausage, cheese ravioli, and Alfredo served on multigrain bread. You could even go a little further with the "Botticelli," which features pepperoni, salami, ham, provolone, and pesto mayo served on sourdough bread.

And for those who are looking for a truly unique sandwich to Erie, the obvious choice is the "Lee Roslyn:" a Twinkie, ham, and cheddar cheese on multigrain bread. This is going to sound slightly blasphemous to some, but I don't like Twinkies. However if I did, I would have grabbed this sandwich to-go, stopped at Six Pack House on the way home, and gobbled it up with a cold Pabst alongside to keep theme with the favorable Americana snack cake.

But since I am not a Twinkie or a stacked-meat lover, I opted to try two different sandwiches than those mentioned above: "The Mona Lisa" and the "Starry Night." "The Mona Lisa," which is comprised of turkey, Havarti cheese, artichoke hearts, baby spinach, tomato, and pesto mayo all served toasted on multigrain bread, was truly a pleasure in taste and texture. Even though it sounds like an overload of ingredients, the flavors are distinct and well-matched. The spinach was fresh and kept the sandwich from seeming soggy, and the pesto mayo was actually discernable and united the other flavors well. This is definitely a menu item that I would not only recommend, but that I will try again.

The "Starry Night," on the other hand, fell a bit short for my palate. A riff on the well-known classic Reuben, the "Starry Night" is made with corned beef or turkey, sauerkraut, Swiss cheese, and wasabi mayo on toasted pumpernickel bread. The wasabi mayo, obviously meant to be a substitute for the Thousand Island dressing and the horseradish that one usually finds on a Reuben, left the sandwich seemingly dry and bland. The wasabi was undetectable, which is a shame for anyone who craves that nasally burn, and the lack of sauce left me craving something with every bite. While this corned beef sandwich was not bad, there were much more tantalizing items on the menu that I wished I had opted for instead.

Both of these sandwiches paired well with a bag of potato chips and a $.99 deli pickle that's a desirable snack in its own right. Most exciting of all was that I was able to indulge in a glass bottle of Coke from Mexico. This is a big deal for anyone who misses that classic Coke flavor but just can't ingest high-fructose corn syrup, along with some other unsavory ingredients. While the Mexican variety is still not "healthy" by any means, it is made with real sugar and the taste is as satisfying as a getaway to south of the border during the tail end of an Erie winter. Sipping one of these bad boys along side my sandwich was truly a pleasure.

So next time you're up by the mall and you're feeling burnt out on chain restaurants, keep in mind this little gem in the sea of big box stores. I will admit that I would be much more likely to frequent Picasso's on a regular basis if it were located somewhere like downtown – here's hoping they open a second location – but the location alone is hardly a reason to not go out of the way in search of a flavor that is truly unique to Erie.