The Rebirth of the Erie County Student Coalition 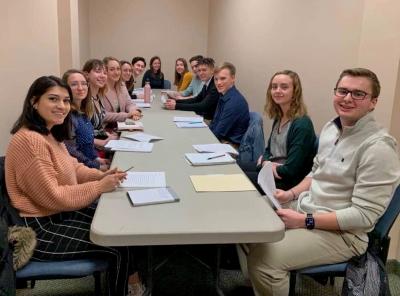 In the wake of George Floyd's death and the consequential protests that have broken out across the nation, activism has found itself at the forefront of people's minds. Generation Z, a group of young people known for their unabashed dedication to social change, is no exception. In fact, students of Erie have answered this call to incite change in recent years. As the Erie County Student Coalition (ECSC) finds itself amidst an ever-shifting political climate, the group works to redefine itself and highlight young people taking action.

Originally gathering to spearhead local high school walkouts in response to the Marjory Stoneman Douglas High School shooting, the ECSC was formed in 2018. The group saw initial success in its trip to Washington, D.C. for the March for Our Lives, a protest organized by survivors of the shooting. Following the march, the ECSC continued its efforts by meeting with local politicians and marching in Erie's pride parade.

North East graduate Lauren Seliga, outgoing president of the ECSC, said the group began to dissipate in the fall of 2018 due to its membership mainly being graduating seniors. It remained dormant until 2019, when Seliga and fellow North East grad Abby Caviglia decided to revive the group.

"Within a matter of weeks, we boosted membership to around 25 to 35 students, made the front page of the Erie Times, and had our first meeting," Seliga said. Now, the group has regained its footing in youth-led social change and is making a name for itself.

Staying true to its activist roots, the organization takes on issues considered to be more progressive such as climate change and gun violence prevention. However, Seliga explained "we also tackle issues such as voter registration, politician accountability, and youth involvement, which are not partisan."

"Our members have common goals, but we do not always agree on everything whether that be support for a specific policy or candidate, or being pro-life or pro-choice," she said.

Currently, the coalition is focused on recruiting students for the 2020-21 school year. Playing on Gen Z's affinity for social media, the ECSC is calling for new members via Instagram, Twitter, and Facebook.

"I first heard about it when I saw a notice for new members on my friend's Instagram story," said Hannah Smrcka, social media manager for the ECSC and Corry Area High School senior. "What made me want to join was that the world needs more youth involvement in each community because a community can only develop when all hands are included. Any good change that can come out of anything is important." That good change has been the apparent focus of the group's endeavors, despite the many setbacks it has faced in its short lifespan.

This past fall, the group's highest priority was to host a town hall with Pennsylvania's 16th District Congressional candidates, including Republican incumbent Mike Kelly and Democratic challenger Kristy Gnibus. While Kelly rejected their invitation, he agreed to meet with group members in private in January.

"This meeting fostered candid, personal conversation about federal policy and overall was productive," Seliga said. "We hoped to schedule another meeting in the spring or summer but of course, this was halted due to the pandemic. At the meeting, we handed Congressman Kelly a very detailed letter outlining why in-person town halls are important and valuable. He said he would get back to us on it but we never received a response."

The coalition then collaborated with the Town Hall Project, creating a new volunteer program for students to find events with elected officials in their area through social media platforms. The program also allows students to gain insight into political issues that affect them and their community. The program was first tested in Pennsylvania and will be promoted in other states such as Oregon, Michigan, and Colorado, Seliga said.

"I hope that we can support and help the students our age to see this movement and also see its importance and to bring about change," Smrcka said. "Educating the youth is the best way to bring effective change and new hope through the next generations."

In February, the ECSC was invited to attend a meeting of the Pennsylvania State Education Association Northwestern Region Executive Committee to introduce itself and its mission. The meeting led to the coalition's collaboration with Empower Erie, through which it helped raise awareness for a community college in Erie through a series of petitions and letter writing to the Pennsylvania State Board of Education.

February also saw the ECSC's biggest project to date, participation in a countywide initiative to implement the Crayola Color Cycle in as many schools as possible. Created by Crayola, this program allows K-12 students to collect and repurpose used markers. Prior to the COVID-19 pandemic, the coalition set the program up at all North East K-12 schools collecting hundreds of markers in just one month. The group hopes to continue this effort once it is safe enough to do so in schools.

Like many organizations, the pandemic greatly impacted ECSC's plans in that in-person initiatives and meetings, which comprised the majority of its endeavors, were canceled. The town hall, arguably the group's most anticipated event, was canceled after months of hard work. On top of this change, members navigated balancing new methods of schooling and a different way of life, something Seliga said was frustrating and resulted in membership remaining stagnant and participation declining.

Still, the coalition is working to find a happy medium in the new virtual world it has found itself in.

"Once school ended, ECSC members were able to participate more which allowed us, as an organization, to put our attention and efforts toward the Black Lives Matter movement," Seliga said.

Though the ECSC did not attend protests as a collective group, Seliga said members took a more individualistic approach toward activism. Members attended protests in Erie, donated to foundations, signed petitions, and raised awareness on their social media accounts.

The coalition found that virtual petitions proved to be the most effective way for the ECSC to participate in the Black Lives Matter Movement while still working remotely.

"We understood that it can be difficult and overwhelming to sort through what petitions to sign or even donate to, which can deter people from participating," Seliga said. "We decided to highlight petitions on our social media pages every couple days or so to help with this."

They focused on posting petitions that weren't getting as much attention and were able to garner over 100 additional signatures and 70 shares on one petition. Some petitions the ECSC promoted include the "Include More Black History in PA School Curriculums" petition and the "Make It A Hate Crime To Remove A Hijab From A Muslim Woman's Head" petition.

"It's hard for any group to have to find a type of new normal, but I do believe that the ECSC has responded well to the pandemic and has still stayed as involved as we can — attending online meetings, trying to get organized for next year, and finding more students that want to be involved in the coalition," said Smrcka.

As the ECSC prepares for the upcoming school year, its goals remain focused on student activism and are characteristically ambitious. Not only does the group plan to continue its Crayola Color Cycle initiative, it also aims to continue their work with the Town Hall Project to push students to volunteer through the student research program it helped create. As the presidential general election draws near, the coalition hopes to reignite its voter registration programs through the League of Women Voters that were held at a few Erie County schools in 2018. Presque Isle beach cleanups and conversations about the environment are also in the works.

Appropriate for its demographics, a large goal for the ECSC is to become an online resource for students. Members are in the process of creating a social media team composed of graphic designers and reachers, which will help get the word out about politics via social media.

"This will allow us to make weekly posts on social media that sum up in simple, nonpartisan terms what happened politically that week, which is an initiative we have been talking about for a while now," Seliga said. "A lot of students do not keep up with politics or do not sift through multiple sources, so the ECSC social media team will be working hard every week to read multiple sources from the left, right, and middle to provide students with accurate weekly updates in hopes of piquing students' interest in politics since it truly does affect so many aspects of their lives."

Despite the numerous hurdles the ECSC has faced since its inception, the passion these young people have for student activism refuses to fade. As Erie's social climate continues to transform, Erie students ambitiously confront challenges demonstrating the power of student advocacy.

"I'd show my peers how it is important and helpful for us and someday our children to be helping and being active in our community," Smrcka said. "If someone does not feel compelled to help a community that raised them, then that means a change is needed in the community that can only be brought on by everyone in a community, not just the adults; which includes those that feel outcast."