Peachfest is over, but the road will go on. 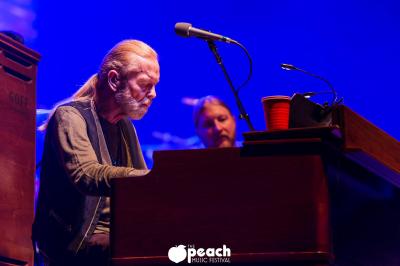 It's been 16 years since my first Allman Brothers Band concert. It was at Starlake Amphitheater outside of Pittsburgh (now known as First Niagara Pavillion) on a stormy Friday night.

Those in attendance will remember that the show almost didn't happen. The lightning and rain was so intense just after the venue gates opened that the promoter requested everyone return to their cars. An audible gasp traveled out from the pavilion and across the lawn. Then came the reprieve, "You will be readmitted and The Allman Brothers Band will play a set here this evening."

Not only did they play a set, they played three sets - seven electric songs, six acoustic songs, and six more electric, including the encore. It was an amazing night of music mixed with some sort of cosmic light show in which the lightning that night seemed to strike and dance to the music over the now ubiquitous white concert tent.

That was a different band in a different time. Dickey Betts and Jack Pearson were on guitars and the setlist was steeped in Delta Blues. In fact, the acoustic set was as much about Robert Johnson as it was about The Allman Brothers Band. But when lightning struck in the distance at the same time that Gregg Allman hit the first chord of Melissa - the last song of the acoustic set - there was no mistaking what the show was about.

I've reflected on that Starlake show many times over the years as I've attended several dozen Allman Brothers concerts since. Each one gets compared to the first. All are good. Few are that good.

So when current ABB guitarists Derek Trucks and Warren Haynes announced they would leave the band at the end of this year, bringing to an end 45 years of Allman Brothers Band touring, you knew the band's signature festival, the Peach Music Fest, was bound to be special.

Nearly 50,000 people passed through the gates of Montage Mountain from August 14-17 for the third annual Peachfest, with more than 6 thousand people making the mountain their home for three chilly nights.

After the announcement that Bob Weir and Ratdog cancelled its appearance at this year's festival for an undisclosed reason just a week before the scheduled start, many festival goers wondered how promoters might replace an act that had been integral to festival success.

They satisfied the disappointed Deadheads, by giving the crowd an extra dose of the Trey Anastasio Band, which was originally scheduled to do a single set on Saturday but agreed to add a Friday set as well.

According to one college student from Vermont, who "tours" with Phish in the summer, "Trey was Fu$@^%g awwweesssooommme." (Imagine she said that in a sing-song voice, because she did.)

But the main event was The Allman Brothers Band. They headlined the festival lineup on Saturday and Sunday nights.

The moment that the Allman Brothers crowd seemed to wait for came early on Saturday as the band played its classic Eat A Peach album.

Government Mule keyboardist Danny Louis added piano to both the opening number, Ain't Waistin' No More Time, and an encore, That's What Love Will Make You Do.

On both Saturday and Sunday the Allman Brothers Band sounded as strong as it has in years, begging the question of whether this is really the end of the road for these Rock n' Roll Hall of Fame inductees.

Just in case it is, the ABB cemented its blues roots by inviting legendary musician Taj Mahal to play and sing on Statesboro Blues, a 1928 Blind Willie McTell song covered by Taj Mahal in 1968 and later by The Allman Brothers Band in 1971.

The Taj Mahal recording is credited with introducing Duane Allman to the sound he wanted to achieve in his band. I suspect he would have been pleased with the sound produced this weekend.

As Gregg Allman left the stage on Sunday night he said he hoped to see the crowd back at Montage Mountain next year. No matter the form of the band, the road will go on. Each of its members have other projects, some more creative and intriguing than the ABB. And although The Allman Brothers Band - in its current configuration - said it wouldn't tour anymore, hopeful fans are holding out for an occasional reprise...Win, Lose, or Draw.