The Sailcloth Art Project Opens at the Bayfront Maritime Center

The Sailcloth Art Project knots together a local nonprofit sailing organization, student painters, and even a dance troupe. 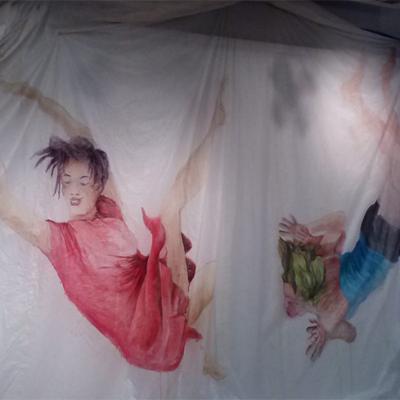 "One day, while out sailing, I looked up and thought 'that sail is so beautiful, I want to paint on it.'"

So began Heather Hertel's idea for the Sailcloth Art Project, which knots together a local nonprofit sailing organization, student painters, and even a dance troupe – all at the suggestion of a former Erie indigene.

The Sailcloth Art Project knots together a local nonprofit sailing organization, student painters, and even a dance troupe.

"We were approached by Heather, an art professor at Slippery Rock University," explained Richard Eisenberg, executive director of the Bayfront Maritime Center, which will host the project. "She thought it might be a good thing to do while Tall Ships was up here in Erie," he added, referring to the event that features sailing ships of bygone eras.

"They'll be hung inside and outside on display," he explained. "It's kinetic. There will be some motion and fluidity, and that's the fine art part of it."

Hertel said via email that three installations are proposed: an outdoor sculpture, a large hanging sail "banner," and an indoor installation composed of five sails; each of the pieces have been in process throughout the summer.

"One figure is flying on a crane," she described. "The students associated it with the albatross, so then "The Rime of the Ancient Mariner," a poem by Coleridge, was also folded into the project. We created a scroll out of sailcloth that the figure is holding while flying on the crane over the ocean."

Hertel added that "The project has been very experimental as the sails are 40 feet in length."

But a dance troupe?

"I associate the free feeling of dance movement and the motion of painting with sailing and the fluidity of the wind," she explained.  "And [the dancers] will improvise to the art installation."

"The Sailcloth Art Project is a new one for us," said Eisenberg. "It's our first collaboration with the SRU art and dance department, and we're really happy about that: to develop partnerships and cooperative events like this." – Gregory Greenleaf-Knepp