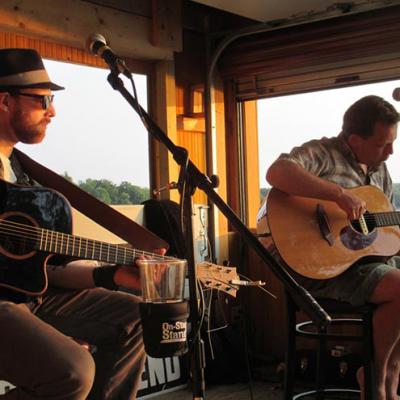 An intimate stage on the shore of a quiet little lake is one superb place to hear the sound of music on a summer evening.

And the stage at Edinboro Lake Resort is just such a spot. The venue has hosted a bevy of local musicians in recent years, regularly featuring a nicely mixed bag of talent for everyone's listening enjoyment.

The resort's revolving door of sonic sweetness opens even more widely this summer. The ongoing Thursday night Songwriter Sunset series is expanding this year to include three hours of musical goodness, highlighting not just one, but at least two or even three uniquely-talented singer/songwriters each week.

The Songwriter Sunset series has featured more than 40 different songwriters from throughout the region since its inception in 2012.

The series has featured more than 40 different songwriters from throughout the region since its inception in 2012, and with its expansion, its fifth year is shaping up to be one for the books.

The music-loving folks at ELR "have done so much, not only to make this possible, but to give songwriters a place to share their [original] music," says series organizer, busy local musician, and event booker Tommy Link (known by many for his work with Erie-based rockers Strangers and Liars). "[It's] something returning artists look forward to every summer."

The schedule for the series – which kicks off on May 26 and runs throughout the summer – is open-ended by design, helping to create the laid-back, creative vibe the Songwriter Sunset has become known for.

Sounds like some more good times are in store just south of Erie this summer. – Ryan Smith