The Toxicity of Inaction 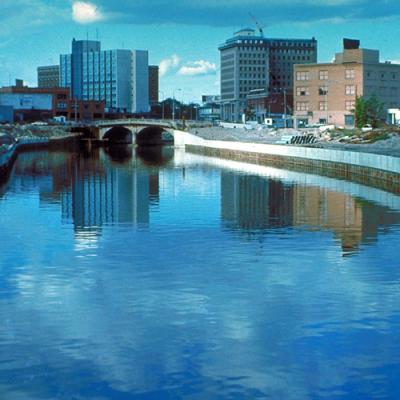 US ARMY CORPS OF ENGINEERS

"Hurricane Katrina epitomizes governmental failure," wrote William Shughart, PhD and professor of economics at the University of Mississippi, in 2006. Shughart outlined bureaucratic myopia and inertia as two of the most fundamental reasons for the preparedness and response failures of those with means to assist the people in need at the time of the disaster.

Ten years later, the timeline and unfolding of the water crisis in Flint shows eerily similar construction to the New Orleans disaster. Both towns are home to many people living in low socioeconomic status and both were led by elected officials with narrow vision and a system based on inaction. The immediate, obvious difference between the two situations is that the hurricane was a natural disaster of very large proportion. Continuous, battering wind speeds topped out well over a hundred mph for tens of hours while pounding rain raised water levels as high as a rooftop.

The Flint water crisis arrived in a much quieter way. Nobody told city residents to attach filtration systems to their kitchen faucets before brown water dripped into sinks and bathtubs. Nobody gave an evacuation warning, and certainly nobody gave notice of impending mass-poisoning.

Unaware of his Shughart echo, Snyder went on to say, "[The Flint disaster] shows that there were multiple failures at multiple levels." How true.

Neither disaster can be explained by simple means or in a small space. Links, however, between the makings of the disasters are quite prominent.

Any disaster, small or large, may be preceded by a few main failures in addition to multiple, smaller tributary failures. Inertia and myopia played large roles in exacerbating the Hurricane Katrina and Flint water crisis disasters, with a few other factors contributing along the way.

Inertia is the resistance of a physical object to change its state of motion. At any point before Katrina hit, city or state officials could have lessened the degree of the storm's impact by listening to warnings and altering their state of preparedness for a major storm. Years earlier, an independent study had shown the probable effects a Category 3 or above hurricane would have on the area. Even as the storm neared, officials at all levels could have taken a more proactive approach, shutting the city down and ordering an earlier evacuation, giving residents sufficient time to depart. Likewise, Flint city and state officials could have listened to residents sooner. Emails within the governor's employee network show awareness of citizen complaints about foul water odor, color, and taste; and odd household illnesses as early as February, 2015.

The Flint River is Flint's equivalent to New Orleans' levees. In both cases, city and state officials chose financial savings over the foresight of public safety and protection. Louisiana state officials knew the levees had sunk below a level capable of protecting the area from a storm surge, and Michigan state officials knew the Flint River was dirty. Both cases showed fiscal restraint, but from a nearsighted point of view, acknowledging only the immediate savings without taking note of the long-term threat to health and life.

In Flint's case, an emergency manager (EM), Darnell Earley, made the decision to switch the water supply source. Gov. Snyder had appointed Earley to the position of EM to find cost-cutting ways to run the city. Prior to the switch, the city had decided to merge with the Karegnondi water authority, but that merge is not set to take effect until the water lines to Lake Huron are completed the end of 2016. In some ways, Earley was just doing his job when he chose the Flint River over Detroit's Lake Huron water. But Earley was not a water expert. He based his decision solely on finances, not on the benefit to the people.

Water authorities tend to run more efficiently and effectively than city-governed water departments. Erie Water Works, which became an authority in 1992, directly receives funds from water bills. Administrators with a vested interest in the well-being of the system then reallocate money to necessary improvements.

Water authorities tend to run more efficiently and effectively than city-governed water departments because the authority is responsible for its own budget, planning, hiring and firing, maintenance, and upgrades. Erie Water Works, which became an authority in 1992, directly receives funds from water bills. Administrators with a vested interest in the well-being of the system then reallocate money to necessary improvements.

"We are part of the public health system," said John Presogna, Water Quality Manager of Erie Water Works (EWW). "We don't really consider our product a utility. When we install a water pipe, we test every stage of the process to make sure it's safe for use before we run water through the new pipe. No other utility does that."

"We are the only 'utility' that has its product consumed," added Paul Vojtek, Chief Executive Officer and Chief Financial Officer. "Things we have done – upgrades we have made in the last 20 or so years have made us a first class water system."

As self-proclaimed "water geeks," Presogna and Vojtek talked for more than an hour about the water filtration process, Erie's water system infrastructure, and the state-of-the-art Wasielewski plant on Sommerheim Drive set to begin full operation in April, 2016. Since initiating infrastructure upgrades throughout the system decades ago, EWW has invested nearly $260 million. Improvements include both hardware and software updates, such as the Geographic Information System, a database-map configuration that analyzes and applies input information to the current water infrastructure and prioritizes areas of concern on a digital map. It is the same system emergency responders use during disaster response and recovery missions.

Flint's decision to use the local water authority is a move that will save the city money and eventually provide residents with cleaner water via a more modern system. In the meantime, Flint's water system continues to operate inefficiently. As first reported by Mlive.com, an online news source for the state of Michigan, the Flint water system is so antiquated that all information about city household plumbing is kept on 45,000 hand-written index cards in a file cabinet.

"Outdated water infrastructure is common," said Nate Drag, Watershed Project Coordinator at the Alliance for the Great Lakes. "Updates are expensive and the plumbing with old houses often contains lead. Cities clean the water but then send it to homes in old pipes. ... nobody wants to spend the kind of money [required for updates]."

Indeed. The question is this: is the aging of water piping systems across America – a fact that borders on gross negligence in some cases – a result of nearsighted leadership, insufficient funding, or lack of properly informed residents to push the issues? All three factors likely played a part in Flint. The differences between a city-run water system in Flint and a water authority here in Erie are stark.

"We use all this technology because we take a lot of pride in the quality of our water," continued Vojtek. "It's reliable and it's safe."

The same could not be said about the product in Flint. Upon hearing of water quality complaints from residents, Flint city officials instructed residents to fill bottles for lead testing, but to run the faucet for several minutes before obtaining samples for the lab. Since more lead leaches into the water system over time, still water resting in direct contact with lead pipes contains more lead.

EWW uses a method called the first-draw sample. Once every three years, they send bottles to 50 homes with the highest risk of lead contamination. These are mostly homes that were built before 1930.

"We tell customers: when you wake up in the morning, before you do anything – before you flush the toilet or brush your teeth, go down and fill up the bottle with the first water from your faucet," Presogna said. "We want to test the water that has been sitting in someone's pipes all night."

"We want the worst case numbers to know if there is a problem," explained Vojtek. "When we install our updates around the city, we only use lead-free pipes. But during certain periods, homes were built with lead pipes in their plumbing. Sometimes the lead pipe is very short, but it's enough to leach lead into the drinking water. Every water test will reveal a trace of lead or other inorganic compounds, but since we started treating the water with orthophosphate in the mid-90s, we have never had an average lead reading above the EPA's minimum allowable level."

For lead pipes, orthophosphate is the Pepto-Bismol protective coating, and for Flint residents, it was the protection missing from their Flint River water supply.

"Orthophosphate bonds to bare metal, preventing direct contact between water and the pipes. When a phosphate coating is present, lead and copper will not leach into resident's drinking water," Presogna explained.

Due to its toxicity to humans and its presence in the Flint city water system, lead is the big topic right now, but it is not the only contaminant of concern.

Everything that goes down the house drain or storm drain ends up in the lake. Sweep the driveway, don't hose it down, and don't over-fertilize. If you put something on your lawn or garden to grow a plant, that same something will grow toxic algae in the lake.

"It is important that we keep our water supplies as clean as possible," Drag said. "Everything that goes down the house drain or storm drain ends up in the lake. Sweep the driveway, don't hose it down, and don't over-fertilize," were a few of Drag's suggestions for keeping Lake Erie cleaner. "If you put something on your lawn or garden to grow a plant, that same something will grow toxic algae in the lake."

Drag's final suggestion is to encourage action in our elected officials regarding disaster prevention.

"It's important for senators and Congress to know that we want to improve in these areas," Drag said. "It's not cheap and it helps if they know that we care."

As new information is revealed daily about the Flint water crisis, the Erie area is reminded of things to be thankful for and things to be mindful about. If we don't want to follow the ways of the aforementioned inert and myopic leaders, we should be willing to ask government to spend money in non-sexy ways to improve safety and revitalize communities.

Do something big or do something little, but don't just stay the course. Don't feed the algae.

Ti Sumner can be contacted at tSumner@ErieReader.com.