The Vaughns: Unique Indie/Alt-Rock at the Ballet Haus 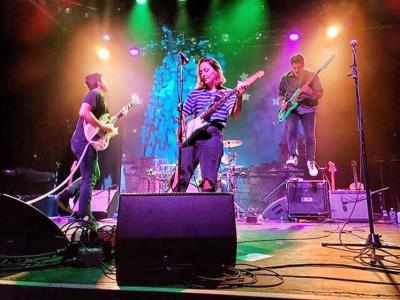 As it so often happens in small towns, Anna Lies, Ryan Kenter, Tom Losito, and David Cacciatore kept running into one another. Anna and Ryan played on the same football team; Ryan met Tom in high school marching band; Tom mistakenly sent a photo of his guitar collection to Anna in sixth grade; Tom and David met while working at an ice cream shop; Anna and David competed in a talent show; and Ryan's family often ate at the restaurant David's family owned. In 2014 they found themselves jamming together, and the chemistry was so undeniable that The Vaughns were born.

The Vaughns are an indie/alt-rock band from New Jersey. They have been nominated for three Asbury Park Music Awards,were listed as one of the Top 35 New Jersey bands to see in 2016 by NJ.com., and were featured on MTV web series *The Brothers Green.

The Vaughns are a pop-rock band with roots in power pop and blues. Lies dominates vocals/guitar/synth, Kenter can be found at drums and percussion, Cacciatore lends his talent to guitar/vocals, and Losito performs bass/vocals. Their sound is described by outside sources as familiar and easy to listen to. But Lies thinks a more accurate description is "like a butterfly in a minefield": the way the band plays can be powerful while Lies has a softer voice.

The Vaughns recently released their debut album *FOMO on May 10th, which will likely be played in its majority at the show. Other possible songs on the setlist include the popular singles "Coffee Sundae" and "Santa Cruz."

Teaming up for this show, The Vics return to Erie from Pittsburgh, along with local acts Josh Travis & Friends, and Penny Racer.  -- Madeline Dufala