Jim Harbaugh and Peyton Manning get a lot of camera love on the sideline. Mike Glennon, not so much. 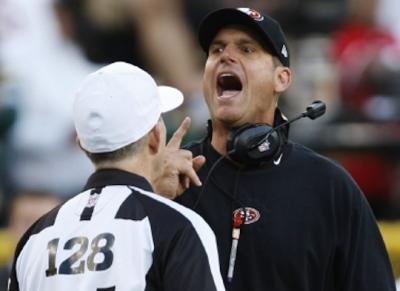 As odd as it may sound, the average broadcast of an NFL game contains little actual action. According to a 2010 study by The Wall Street Journal, the average NFL matchup contained just 11 minutes of actual play, with the majority of the broadcast featuring a bunch of athletes and coaches just standing around.

It's a bit of a deceptive number, as the football chess match between plays are a big part of the narative of a game, but the downtime still makes for a lot of creative editing for TV prodcuers. One simple solution for that is the sideline shot: a quick cut to a player or coach by their team's benches. It's a fairly common occurrence during an NFL game, but not all team members are quite equal in a producer's eyes. Once again, the football-loving researchers at The Wall Street Journal did another study on their football blog The Count, this time recording the number of times a quarterback or head coach was shown during a sideline shot over the course of an entire game.

For the study, The Count reporters watched "two full games from the 2014 season for all 32 teams and tallied the number of times the broadcast cut to the head coach (regardless of duration)." The results are pretty interesting, albeit mostly unsurprising. Future Hall of Fame quarterback Peyton Manning of the Denver Broncos edged out New England Patriots pigskin tosser and fellow future Hall of Famer Tom Brady for the top QB spot 31 shots to 29.5. Brady's frumpy head coach Bill Belichick also fell just short of first, falling just one shot shy of San Fancisco 49ers bench boss Jim Harbaugh's 45.5 shots per game, a victory for Sharpie and khaki pants enthusiasts everywhere.

Unfortunately, Mike McCarthy's Sharpie game can't quite match the veiny Harbaugh's, as he logged just 13.5 shots per contest, fewest among head coaches. Still, even he finished higher than 15 different starting quarterbacks, including the impressively-bearded Ryan Fitzpatrick and poor Mike Glennon, who gets shown just 5.5 times in a Tampa Bay Buccaneers contest when the offense is off the field.

The Pittsburgh Steelers duo of Mike Tomlin and Ben Roethlisberger are a popular pair, finishing fifth and tied for 11th, respectively. As for the Cleveland Browns, Brian Hoyer finished eighth for quarterbacks, while Erie City Councilman Bob Merski-lookalike Mike Pettine landed in 20th (Sorry, Bob). Johnny Manziel was not ranked, which is good, because he would probably make Glennon feel even more unknown.

Check out the whole rankings at The Count and feel free to keep count of sideline shots during Sunday's NFL games. Perhaps in the future we can even incorporate these shots into fantasy football (PPSS - Points Per Sideline Shot?). Until then, enjoy the Sunday Sharpie exposure.