The ripple effect of Snowden. 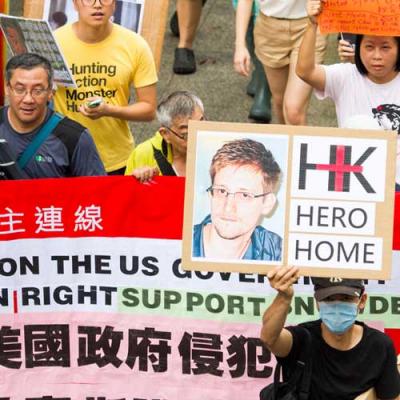 Edward Snowden. The name alone evokes extreme reactions from all corners of the world.

Now he's on the lam. Except we all know where he is. At the time I write these words, he's living in the transit zone of Moscow's Sheremetyevo  International Airport. This reminds me a bit of the movie "The Terminal" with Tom Hanks. Except Hanks' character was this lovable guy who dances a delicate balance between comedy and sadness, enriching the lives around him through his simplicity and attitude and giving his counterparts a softer look at the world around them.

And Snowden, well, isn't that guy.

It is the classic scenario. One kid in the class takes advantage of the system, breaks or ignores the rules, and everyone else suffers for it. Sometimes I find these types of situations refreshing, but because our bilateral relations with many foreign nations are already rocky, I question the value of Snowden's decisions.

He must have thought it was the right one, though. As a result of his efforts, he gave up his cushy $120K-a-year salary and home in Hawaii to seek asylum in…Russia – a country that ranks  as the third-most depressed and suicidal in the world. And while I'm one for using moral judgment on issues, he seems to believe the one he made trumps that of our entire political and court systems and tens of thousands of his coworkers. And the damage is potentially so great that NSA has taken one of its most respected senior operations officers off mission tasks to lead the damage assessment effort.

And then there are the obvious operational effects of informing our enemies of American intelligence procedures, tactics and techniques. But this goes beyond the "what" and into the "how," which makes the information he has twice as dangerous. Although Snowden has promised not to reveal this data, there are already national reports of counterterrorism targets changing their communications patterns. And, honestly, I would lose respect for Russia if they haven't at least tried to harvest this treasure trove of information.

Moreover, there's now a lack of confidence in the ability of the United States to do anything secretly or discreetly. Which, in turn will further sully our relations with other countries around the world.

House Intelligence Committee Chair Mike Rogers said it best about Snowden: "He may as well just go to North Korea and Iran to round out the 'Government Oppression Tour.'" And if Snowden's efforts were truly based on what he deemed to be the "greater good," he should face the music. Running from problems never made them go away, or does it?

I guess that depends on what his motivation truly is. And only time will tell.