The Way I See It: City buses rerouted, texting and driving 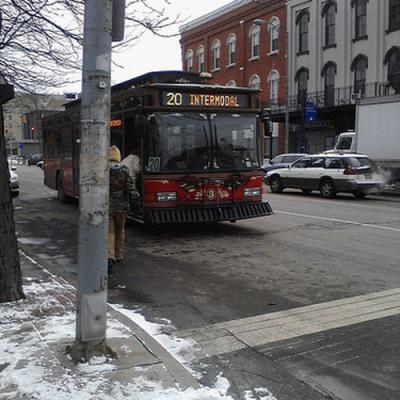 The decision appears to have been made without consulting those who actually ride The E. And while, oftentimes this type of top-down decision makes sense, when the issue could potentially present a safety hazard, I think those that utilize the services should at least have an opportunity to voice their concerns – concerns such as the safety and well being of others. Just as a starting point, statistically speaking, the number of crimes committed in areas that aren't as heavily trafficked are higher than those that are more congested.

Seeing as Peach and French streets only provide one way routes and French Street isn't considered as main a thoroughfare as State, this may pose a serious threat to the safety of our citizens. Children and elderly and those traveling alone come to mind first.

The excuse to ease congestion on State Street will only bring more congestion to Peach and French streets since they operate one-way traffic. On State, buses pull into designated areas on the parking side, in front of shelters (that presumably would have to be moved, and at the very least, torn down), leaving the lanes open for traffic – moving in both directions. But on Peach and French, there is no room for traffic to pull over to the side.

And when those people don't have the option of owning their own car or make the choice to rely on public transportation, I think it's up to us as a community to do our best to offer what is in the best – and safest – interest of the entire community. Whatever the ultimate decision, the community – particularly those directly affected – should be part of the conversation and not just shifted over a block, out of sight, without being welcomed into the conversation about them.

In general terms, change is good for all of us, but the powers to be haven't really given us detailed reasoning for their actions – and until then, I'm just not sure the ends justify the means.

On the road, off the phone

Speaking of transportation… it's summer and school's out. For younger drivers, this break means more time behind the wheel. According to the National Highway Traffic Safety Administration (NHTSA), car crashes (and related injuries) happen most often between Memorial Day and Labor Day. And in the last decade, over 68,000 teens have died in car crashes.

However, an even bigger concern is distracted driving. Although all of us know the dangers associated with texting and driving, 40 percent of American teens say they have been in a car when the driver used a cell phone in a way that put people in danger. And this goes for all ages.

To put this into perspective, sending or receiving a text message averts a driver's eyes from the road for an average of 4.6 seconds.

That's the equivalent of driving – at 55 mph – the length of an entire football field… blind.

Despite the risks, the majority of teen and adult drivers ignore cell phone driving restrictions. However, it really is a dangerous game of Russian roulette. Even if you think you are completely cognitive of everything going on around you, the truth is, driving while using a cell phone reduces the amount of brain activity associated with driving by 37 percent. So, even when you think you've "got it totally handled," you don't – you only have it 63 percent – less than two-thirds – handled.

So, this summer, put the cell phone aside when driving. You don't know whose life you'll be saving otherwise – and you don't want to have to find out.