The Way I See It: Pope Francis and the Future of the Catholic Church's Banking

Amidst a sea of allegations, Pope Francis opts to back the Vatican Bank. 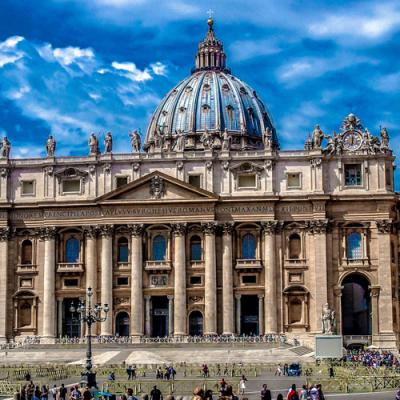 With more than 1.16 billion members worldwide, it is the largest Christian church and one of the oldest religious institutions in the world. With 78.2 million self-identified members nationwide, the Catholic Church is also the largest single religious denomination in the United States, making up 25 percent of the population. And over the course of the last several centuries, it has been dogged by corruption and scandal, alongside a lack of transparency and accountability.

Outside of the sexual abuse scandal that has plagued the church in recent years, the financial scandal has gone on for far longer, most notably since 1929 when the Church was at its most destitute. At that time Pope Pius XI was living in a damaged, rat-infested palace, worried about how he would even pay for basic repairs. And yet in less than a century, the Church would undergo an incredible reversal of fortune. Much of the initial transformation can be credited to fascist leader Benito Mussolini who, in that same year, signed the Lateran Treaty, which helped him gain support of the Italian populace. In return, the Church received a payment of $90 million, sovereign status for the Vatican, and tax-free property rights – amongst other benefits. With the stroke of a pen, the Pope solved the Vatican's woes nearly overnight while at the same time setting up decades of scandal with some of the darkest forces in the 20th and 21st centuries.

Which brings us to today – and more specifically to the Vatican Bank. The Bank, (which really isn't a bank at all) has come under much scrutiny and has been the subject of scandal for decades. Originally established in 1942, and previously known as the Institute for Works of Religion (or IOR), it was created for priests, nuns, religious orders, and Vatican employees. In 2012, it was alleged to have engaged in illegal money-laundering and tax-dodging practices.

When Pope Francis was elected in March 2013, he made it clear that reforming the Vatican's financial mess was a priority. Not only did he want to create a church to better serve the poor, he also was intent on rebuilding the Vatican's scarred reputation. Over the years the account holders of the Vatican Bank have been tied to several allegations of money laundering, tax evasion, and fraudulent bankruptcy. In February, the Pope tasked Australian cardinal George Pell with attending to the many financial problems. And even prior to Francis, Pope Benedict also played a role in helping to clean up the tainted image. Through his appointments and regulations, hundreds of accounts were closed, anti-money laundering regulations were instituted and several investigations into suspicious activities were launched. The Bank, which at one time had more than 30,000 account holders, after a thorough vetting, now has nearly half that number. Last year alone, they closed 900 accounts; currently there are 18,900 still standing. As a result of the scrutiny, there has been much talk about the future of the Bank – including the possibility of closing it.

Yet, on April 7, Francis opted to back the bank, provided that it presses ahead with efforts to bring its banking practices up to international standards. While he's offered no specifics as of yet, Pope Francis ensured new financial structures will be drawn up and transparency will be stressed in the details.

This decision surprised some who thought he might close it to send a message of zero-tolerance for their practices. I suspect that Pope Francis is still sending this message, but without making that choice. While the group will face serious challenges before they're clear of corruption, this is just another example of how Francis is improving the church. He continues to live by example by upholding true Catholic values – faith, hope, love, compassion, service, truth, justice and forgiveness. It is one of many critical moves the Pope has made, by helping to bring trust back to every aspect of an institution which exists to guide its parishioners.