The Way I See It: Reflections on the Tent City

Thinking about pitching a tent near the railroad tracks? Think again. 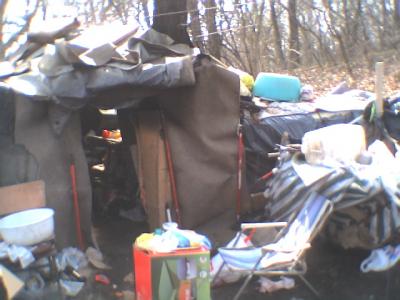 Up until just a few days ago, an area known as "tent city" existed in Erie. It was a homeless community near the railroad tracks located at 14th and Chestnut streets. This was one of seven camps that existed in the Erie area. The residents who lived there weren't just local – they came from all over the tri-state area. These individuals traveled up and down the tracks and the Interstate. Many of you probably drove by this location and didn't know this place existed. Now, it no longer does.

As of Thursday, Oct. 11, the remaining four occupants and two dogs were evicted from the property. Shortly after, structures and trees surrounding the area were bulldozed.

CSX, a major North-American railroad headquartered in Jacksonville, Fla., said it understood the occupants' need for shelter, but wanted them off its property. CSX has been quoted as saying the homeless adult men and women were trespassing, and it was dangerous for them to live so close to railroad tracks.

In the days and weeks before the eviction, many local residents stepped up to try to help these individuals. Homeless-outreach workers assessed their needs – and ultimately seven occupants qualified for housing. Kudos to those that stepped up by providing clothing and blankets and food to those in need, and kudos to the shelter workers who helped by providing assistance and helping them get off the street.

What concerns me most isn't this particular situation – as sad as it is – but the numbers that correspond with it. For those of you who aren't aware, Erie's homeless population, according to Erie County's Department of Human Services, increased this year, from 405 in 2011 to 439 this past year. And yet, nationally, the numbers have decreased. The United States Department of Housing and Urban Development reported that across the U.S., 636,017 people were homeless in 2011. That's a decrease of 13,900 from 2010, according to the latest numbers available.

HUD's annual homeless assessment report also showed that 1.65 million people spent at least one day in an emergency shelter or transitional housing program in 2010. It's tough to grasp this reality, and as the weather gets colder and winter approaches, this is something we all should become more aware of.

Which brings me to my next topic: The United Way. Recently, the nonprofit cut all its funding to the local Boy Scouts of America French Creek Council and partially cut funding to two inner-city centers: Booker T. Washington and Martin Luther King. The combined funding cuts of nearly $135,000 will take effect in June. The United Way has opted to focus its efforts in large part to help those living in poverty.

Many wondered if this was the appropriate avenue, but when looking at the bigger picture, sometimes greater risks are needed to achieve greater rewards. The plan is to help 10,000 local families become more self-sufficient and live without any form of public or private assistance by 2025.

This, I believe, is one of the city's most pressing needs – and one that needs not only the assistance of organizations such as the United Way, but from each and every one of us. We live in one of the richest countries in the world and yet we can't find a way to take care of our own. Like many, I don't have the immediate answer to this problem, but I hope someday to be part of the solution. Change is never easy, but it is essential if we hope to create a better future for not only ourselves, but for our families and our neighbors and those who need it the most.

Many thanks to those of you working at the shelters and nonprofits and the individuals donating their time and energy to help those living in poverty – your efforts don't go unnoticed. The fact remains though, this is one issue that needs to continually be addressed.

So in the fitting words of Mother Teresa, "Yesterday is gone. Tomorrow has not yet come. We have only today. Let us begin."

Love? Hate? Agree? Disagree? I want to hear from you. Email me at rStyn@ErieReader.com.