The Way I See It: Sinnott Uncontested, New Deputy Warden

News with a local focus, brought to you by Rebecca Styn. 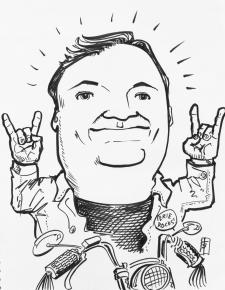 At times I have complained about how our democracy doesn't always operate justly, but on occasion, I find that silver lining in the way some of our government functions, and that's when I take a small moment to rejoice and reclaim my love for our system.

This most recent small moment falls in accordance with the fact that this year Erie Mayor Joseph Sinnott will run unopposed.

What prompts me to have this moment is two-fold: my own perspective on the subject, and seeing the United States' largest grass-roots efforts working in accordance with the system – term limits.

Yes, this is true. Lucky for him, he will go unchallenged. For some of you, this may come as a disappointment, that no one was willing to step up and contest him – that would truly be democracy in action.

But we can look at this two ways: we can be disappointed in the fact that there's no real challenger – nobody to fight the good fight, putting democracy into action – and talk about the fact that there will be no new face in that office. Or, we can shift our perspective.

We now have a mayor that doesn't have to campaign, that has no need to be taking personal donations from you and utilizing your hard-earned money for him to conduct his politicking. We also have a mayor that can focus totally on the efforts of the "greater good" and put all his time and energy helping our city grow and prosper – which he's been doing to a degree all along– but this time he can do it without losing valuable time with the routine of shaking hands and kissing babies.

We also have a mayor that can't run again, no matter how much he may want to stay in office. I'm not rushing Sinnott out, but I am a huge proponent of term limits – for better or worse – and our city seems to agree with me on this.

I understand at times, term limits can force talented and popular leaders out of office, only to be replaced by inexperienced politicians. However, overall, term limits drive out career politicians, help to increase competition, encourage citizens to begin voting on principle – not person, help voters hear about new and fresh ideas, encourage new challengers to step up, create greater voter participation in elections, and downgrade seniority in favor of meritocracy.

In short, term limits do a lot.

To put this in perspective, at the state level, re-election rates are upwards of 90 percent in the House of Representatives office – a body that boasts no term limits. I cannot imagine 90 percent of those incumbents deserve to still be in office. The issues we have today – those that splash across the television screen and newspapers daily – tell me this in a nutshell.

I know we all have our own opinions – and I welcome yours – however, I believe our mayor will take advantage of this time in a way he may have not been afforded before. I look forward to seeing him in action during his final term in office. He's in one of the most ideal places an elected official can be  – working for the city and our communities, without operating under the immense weight of running for re-election.

Four years from now (well, probably three), fresh faces can step up and throw their political hats into the mayoral ring. Hopefully, a couple of you will participate – especially since there will be no incumbent that will have an automatic advantage, making it a fair fight from the start.

(Classroom) Education is (not always) Key

This past week County Executive Barry Grossman hired Kevin Sutter to take over as deputy warden of the Erie County Prison. He is expected to take over for Prison Warden James Veshecco when he retires later this year.

Sutter doesn't have one.

Because of this, a personnel code waiver – which would waive the county hiring requirement that deputy prison wardens hold at least a four-year college degree – was introduced to county council to serve as a caveat to hire Sutton. However, it turns out the waiver was not needed. Therefore, Sutter is expected to start Monday, March 18, no degree required.

I am an ardent proponent of continuing education. Personally, I am still furthering my own education. But sometimes I think education can be more fruitful when it's not in a classroom setting and that formalized training is not always relevant or necessary to have a good career. Oftentimes in life, direct, hands-on experiences make a greater educational impact for us.

I think most of us can attest to the fact that many of our undergraduate educations have had at times little impact on where we are today [read: my bachelor's degree was in music]. And many of us don't always have the means to pursue a higher education [read: the continual fight for a local community college], so, I applaud Grossman for taking all things into account and not completely dismissing Sutter based on his lack of college credentialing.

After all, I know many brilliant people who never went to college.

And most are making more money than I will ever see in my lifetime.