The Way I See It: The Trouble with Raising the Minimum Wage

Seattle's minimum wage increased to $15 per hour -- more than twice what Erie residents make at $7.25. 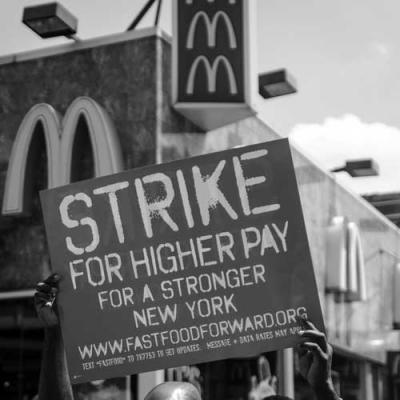 Recently, Seattle passed the highest minimum wage ever seen: $15 an hour. Assuming a 40-hour workweek, this hike equates to $31,200 gross annual income. For us Pennsylvania folk, that's over twice our current wage of $7.25, which has been in place since 2009. Also interesting to note is aside from Seattle, twenty other states have a higher minimum wage than Pennsylvania.

Since November 2013, President Barack Obama has been trying to increase the minimum wage on a federal level – to $10.10 an hour. But it's received much criticism – and Congress has not decided to move forward with the legislation. Case in point, in Pennsylvania, a proposed change in the minimum wage currently sits in the House of Representatives.

On the positive side, according to the Bureau of Labor Statistics, a leap to $10.10 would be enough to get a large number of the working poor out of poverty. It would bolster the earnings of about 16.5 million workers, providing $5 billion a year more for families living in poverty and $12 billion a year more for families earning from one to three times the poverty threshold. Closer to home, statewide, the move would help more than 1 million workers.

And the truth is, nobody that works full-time deserves to be living in poverty.

However, just because something seems like a good idea, doesn't always mean it is. The Congressional budget office estimated that lifting the minimum wage would also reduce total employment by about 0.3 percent, eliminating 500,000 jobs. So, we'd be raising some families out of poverty while displacing others.

Economists maintain that a raise will spur economic growth by distributing more money to lower-wage earners, thus helping low- and middle-class families climb the economic ladder. And conservatives believe that raising the minimum wage would cause businesses to hire fewer workers, which would in turn hurt the very employees the raise is looking to assist.

In Erie, much of our local economy relies on small businesses. We are just now, as a country, coming out of one of the most devastating economic recessions we've ever experienced. Just last week it was announced that the total number of employed in the United States is finally back to pre-recession levels, yet unemployment numbers still remain high. An increase in minimum wages here could hurt many of our local small business employers.

Another factor to consider is that the wages you get paid are not the only things that make up the amount that your employer is paying out for your work. On a larger scale, there is health insurance and 401k plans. On a smaller front, there are employee meal plans and other small perks. If businesses suffer, those added employee benefits could be in jeopardy.

The irony to all of this, however, is even with an increase, according to the Center for Economic Policy and Research, if the minimum wage would have kept up with increases in worker productivity (a measure of the amount of goods and services that can be produced within a specific timeframe) over the years, the actual federal minimum wage would be about $21.72 an hour today.

The truth is, situations like these shouldn't be decided on the federal level. While I do believe anyone working a full-time job shouldn't be living in poverty, the increase on a federal level could actually hurt the local economy (one that is already stagnant). Then, the increase could end up driving more individuals into poverty than those being lifted out.

A letter from 33 Pennsylvania chambers of commerce sent to the General Assembly this past week says the last time Pennsylvania increased the minimum wage, many small businesses were forced to reduce hours, halt hiring, and cut jobs, and a boost to $10.10 an hour could result in the loss of 28,000 to 119,000 jobs in Pennsylvania.

The benefits simply do not outweigh the costs. It has been six years since the Great Recession started and the economy is still only sluggishly limping along. The Affordable Care Act and a host of other regulatory changes from the current administration have created great uncertainty for small business owners throughout the country. This uncertainty has frightened business owners who are waiting to see how these regulations affect their bottom line. This change would only increase the unknown.

While recognizing our minimum wage is low, this may not be the time to raise it. There will be a time, but with the state of our current fragile economy, decisions like these should be left in the hands of the local and state legislatures. While there is a good argument that decisions made at the federal level make the system more consistent, some things should be left to local and state government, where the voices of individual residents not only carry more weight, but at times, better insight.