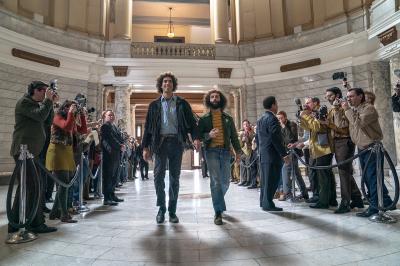 Aperiod film is never just about the period it is depicting. They are always made to make a statement, either comforting or upsetting, about the time in which they are made. Even though Aaron Sorkin's new film The Trial of the Chicago 7 is set in 1969, it's quite clearly speaking to our own era of political uncertainty and open hostility towards protest. The film is supposed to be a celebration of revolutionaries, so it breaks my heart that Sorkin chose to present it in the most safe, conventional method possible. What should be a battle cry ends up more like a TV movie-of-the-week.

Following the riots at the 1968 Democratic National Convention in Chicago, the film follows eight protesters who were arrested and charged with conspiracy to start a riot. As the case drags on for weeks and months on end, it becomes obvious to these men that the system is determined to make an example of them and what follows becomes one of the most notorious trials in American history.

As is expected of Sorkin (The West Wing, A Few Good Men, The Social Network, etc.), the writing is sharp and energetic with rapid-fire dialogue and witty humor. The directing, however, sadly follows the rules and conventions of the courtroom drama playbook step-by-step — anyone who has ever seen a movie before in their life will find no surprises here. With no real directorial flair, the actors are forced to carry the film on their backs. Some are more than up to the task (Mark Rylance), others are left out in the cold (Eddie Redmayne and Joseph Gordon-Levitt). A story about radicals requires a radical director and Sorkin is about as un-radical as they get. — Forest Taylor