The Wild West of Comedy 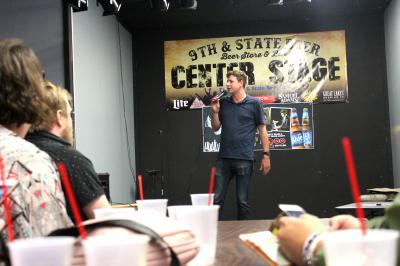 Put yourself out in front of a bunch of humor-particular people, most drinking, all ready to judge you, and well.

Now, you — just, you — make those bastards laugh. Then (still just you) make them laugh again … and again.

That's the basic set-up and goal of most stand-up comedy, wherever it's happening. No joke: That stuff is not easy to anywhere — and not in our little city of Erie. And definitely not on a Tuesday night.

The sort of brutality of it all only mounts when that stand-up is of the shotgun-DIY, open-mic variety, put together and pulled off by a bunch of at-least-mostly perfect strangers to whatever crowd shows up. Or doesn't.

Compared to a polished big-venue gig presented by some well-known, contract-backed, salty-dog veteran comic to a presumably adoring — and ticket-buying — audience, well, it was like the Wild West up in there at the 9th & State Beer Cafe during one of FUBAR Comedy's most recent stand-up open-mic nights.

There was a heavy-browed, middle-aged fellow (a first-timer to the mic) who delivered his jokes via grumpy complaint, Archie Bunker-style. A long-haired dude (another first-timer) who, channeling a Steven-Wright-meets-Mitch-Hedberg vibe, deadpan-delivered some nice chuckle-worthy material.

And there was one guy who, after talking a little bit about crack-cocaine getaways in Southern Pennsylvania, started "borrowing" a bit — like, a whole, classic comedic bit — from the very funny and very famous Dave Chappelle.

The room emptied a good bit at that moment: Cigarette break, anyone?

"He could've at least done it well," one of the breakers said as he stepped out the door and lit up.

After that, though, the rest of the evening got right back and stayed on the original track with performances by a couple of real-deal working comics, headliner and Erie native Ryley John Phillip and his funny pal Amber Maeda, who both traveled from their current home bases in Cleveland to road-test some of their own, unstolen material.

Both young people — through their respective irreverent, raunchy but well-read comedic lenses hit on everything from poor adulting and sad-boy culture (that's Maeda) to violence, sex-addict teachers, coming out, and growing up in the "Alabama of the North" (that's Ryley).

Traveling throughout the region to present their jokes, comedians like Ryley and Maeda — and FUBAR host/organizer and local comedian Daniel Brady, among others — are becoming pros through footwork, word-of-mouth, and experience. They know funny, they know uncomfortable, and they know how to time and work a crowd with both.

"Believe it or not, this is what I wanna do for a living," Ryley told the crowd.

And presenting that kind of work — from whoever's brave enough to try to do it, to get up there and risk deep personal embarrassment for the reward of some laughs from mostly-strangers — is a big part of what the FUBAR Open Mics are all about.

Meanwhile, JR's Last Laugh Comedy Club just hosted its fifth monthly open mic night, showing that Erie's headquarters for comedy is happy to get in the do-it-yourself game on occasion as well.

"I'm glad [organizers and venues] are finally doing this in Erie, getting a mic going," said Ryley.

Brady said the next Open Mic Night at 9th and State is set for Aug. 24.

And from there, he said, he's also more than happy to talk with other Erie bars and performance spaces — anywhere there are microphones that may be made, well, open — about setting up more stand-up events

"I want a comedy scene in Erie," Brady — who also hosted a Comedy Night at PACA Theater featuring Maeda and other comics from around the region on Aug. 4 — told me after the recent show. "Everyone's lives would be so much better if they could just laugh once in a while."

He added, "We have some really funny people around here" with a knack for making that happen.

Again, that's good work. Keep shining a light on it. Er, putting a mic up in it.

Ryan Smith doesn't know any good jokes, but he digs people who do. You can reach him at rsmith@eriereader.com, and follow him on Twitter @ryanmsmithplens.