The Writing's on the Wall: Global Summit VI 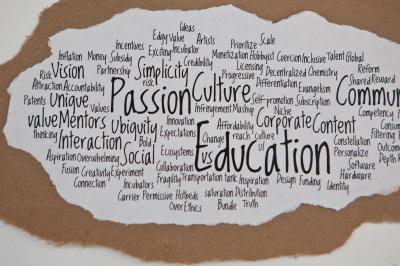 The local ramifications loom large. On Tuesday and Wednesday Charles Mann discussed the world in the Age of Columbus and Aspirin Wars, two tales of global competition that serve as metaphors for business in the age of globalization and decentralization.

As Erie attempts to brand itself for the future - to find its niche in a metropolitan based global economy - it would be wise to heed the primary takeaway of Mann's tales of property and proliferation: "Capitalism isn't about winning the competition, it's about avoiding competition."

In following that mantra, the region will carve out its place in post-industrial manufacturing just as it did in manufacturing during both the nineteenth and twentieth centuries. But we must first recognize that the success of the latter was build on the foundation of the former. In embracing the structural strengths of the region and the community, Erie will find its place and its path toward innovation and prosperity.

Enter poet Stephen Burt. On Wednesday, the Yale-trained Harvard professor of poetry discussed the role of structure as a creative muse. A poem without fourteen lines is not a sonnet. A three line rhyme with five syllables in line one, six syllables in line two, and five syllables in line three is not a haiku. It's just a rhyme. The structural form of the object forces the artist to work within these constraints, to be creative, in his or her marshalling of language.

In many ways, Erie faces the same creative problem. It must recognize, select, and commit to the structure it has and will have in order to understand the steps it must take on the path toward innovation and prosperity.

The following night Bruce Katz, vice president of the Brookings Institution and author of The Metropolitan Revolution, emphasized the importance of understanding the community's identity in moving forward in the post-industrial economy. The cure for economic flight and blight remains manufacturing, even if manufacturing doesn't look the same as it did when the Gem City truly shined. But from the structural framework left behind in the wake of its rusting,  it can commit to building on its successes rather than languishing in its failures. The region and the local economy can flourish and thrive.

None of this is possible without collaboration and cooperation, symbiotic chords for both Katz and Sister Joan Chittister, Friday night's keynote speaker. There is no individual "hero" that will change the trajectory of our city - no juiceman, no one business, no one industry - that will rescue a community that doesn't want to be saved. Instead it will take a chorus of voices with profoundly clear objectives build on the things Erie has always done well and the kind of place it wants to be.

If you're thinking that this sounds rather broad and platitudinous, it's because the region has spent the better part of a generation attempting to hold on to memories and mores, sponsoring study after study for which there is little support past the administration for which it was commissioned. As a result the city and the region are tabula rasa - blank slates.

Collaboration, creativity, and a solid moment of self-reflection is the only writing left on the wall.