There's a Circus in Town 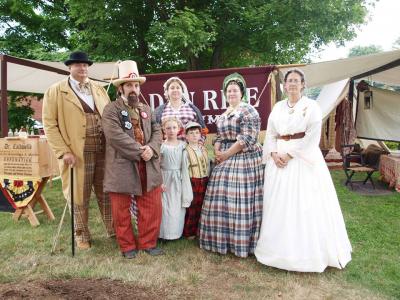 Let's talk about the elephant in the room — you're either hallucinating or (most plausibly) it's a phantom pachyderm, trumpeting the arrival of yet another Dan Rice Days from the beyond.

Who was Dan Rice, you ask? Only one of the preeminent entertainers and traveling circus managers of his day, with his "Great Hippodrome and Menagerie" drawing huge crowds and fat stacks ($30,000 a week in today's money) on the regular. He became a foundational figure in Girard history after choosing to spend his offseasons there, with his charismatic personality and abundant wealth both leaving indelible imprints. The equivalent of a self-made millionaire before he hit his 30th birthday, he definitely would have made Girard's "40 Under 40" at some point in the 1850s.

Although he had his detractors and certainly had his flaws, throwing a banger of a party was never one of his shortcomings. Dan Rice Days is a celebration of the Borough of Girard and the man who helped make it, paying homage to the circus ringleader's fun-loving nature with four days of family-friendly activities. The 53rd anniversary of this tradition begins Thursday and ends Sunday, with jugglers, magicians, musicians, crafters, cruisers, bakers, and more filling out the bill. The climax is Saturday's Dan Rice Day Parade at 11 a.m., which is a callback to the colorful entertainer's return to town after his summer travels (Sunday's Ford Mustang Cruise-In and all-afternoon pool party make for a solid denouement).

If you consider yourself a bit of a traveling circus, take heart — both literally and figuratively there are several ways to get your wheels moving. Per annual custom, the Dan Rice 5K will get underway Saturday morning at 8:30 a.m. New this year is the Lake Erie Cyclefest's Tour de West County in tandem with the celebration (see the associated article for more information). Saturday afternoon will also feature a co-ed softball tournament.

Of course, what would Dan Rice Days be without a little zaniness? This year that zaniness will come funneling through a fire hose at 90 psi in Saturday's Water Battles at A.F. Dobhler Hose from 2 to 4 p.m. In this contest, teams of three (with one optional coach) will spray pressurized water at a cable-suspended barrel, trying to push it towards a stop on the opposing team's end of the wire. The first team to win 2 fights will claim the heat and advance in the tournament. Water pressure hurts, so watch where you point that thing (unless it's toward the glory of victory).

Even if you're not one of the borough's roughly 3,000 residents, you can still take a piece of Girard home with you, whether you bid on an old street sign in the silent auction or merely spend a few hours appreciating what it would've been like to walk in a clown's shoes. Sometimes making a serious impact really is a laughing matter. — Matt Swanseger

Thursday through Sunday, visit danricedays.com for the full schedule of entertainment, activities, and associated costs (where applicable).

Discover Cinematic Magic with Movies Under the Stars

by Matt Swanseger7/3/2020, 12:15 AM
AHN study confirms the effectiveness of elastomeric respirators in healthcare settings

by Matt Swanseger7/2/2020, 11:30 AM
Why the novel coronavirus hits certain genotypes harder