One-man musical act Abadon Faluz provides some lessons on the art of looping at the King's Rook Club.

by Alex Bieler
View ProfileFacebookTwitterInstagramGoogle+RSS Feed
January 7, 2015 at 4:00 AM 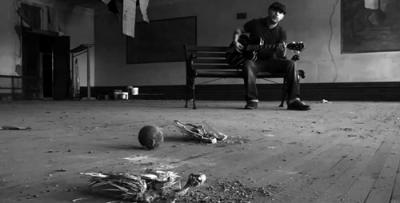 Michael Edgerly likes to throw his audiences for a loop. One minute, he'll be laying down a riff on his guitar, the next, he'll be knocking out a drum beat, adding different elements to a song

until it all comes together into one fully-realized tune.

Edgerly is a one-man music-making machine under the moniker Abadon Faluz, carefully piecing together musical creations with a few different instruments and a know-how of looping (the act of recording different sections in order to repeat them through a song. The talented man known as Abadon Faluz – when he's not rocking out some alternative techno-folk as London Underground, that is – will headline a free show at the King's Rook Club Friday, Jan. 9, dabbling in themes like murder and mayhem during his self-described "Mississippi blood blues" songs.