Fans of broad-minded R&B are highly encouraged to take Drunk for a drive. 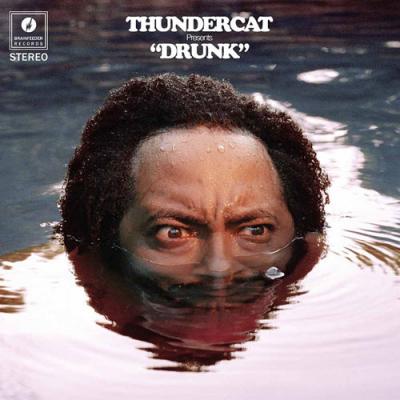 Once again bass virtuoso Thundercat (Stephen Bruner) swerves and veers over stylistic lane lines, and once again it is the listener who stands the greater chance of being arrested. Eclectic and beautiful (if sporadic), Bruner's third album jumps from Zappa-esque quirkiness ("Captain Stupido") to daydreamy pop ("Bus In The Streets") to spaced-out arcade lounge ("Tokyo") with apparent ease. The record unfolds in the stream-of-consciousness fashion of someone freshly buzzed, introducing a host of musical ideas that aren't always fully fleshed out, characteristic of vignettes more than songs. Nonetheless, the sci-fi inflected electro-funk of "Friend Zone" and the heavily-under-the-Isley-Brothers-influence "Them Changes" make for great singles candidates. Of course, it's not a party unless Kenny Loggins and Michael McDonald show up halfway through ("Show You The Way"). Tying it all together, though, is the tandem of Thundercat's six-string bass and multilayered vocal harmonies, brilliantly expressive and effective without much need for embellishment ("Lava Lamp"). Fans of broad-minded R&B are highly encouraged to take Drunk for a drive.
– Matt Swanseger