Roar on the Shore brings millions of dollars to the Erie region, but some local business owners think they're being cut out of the action. 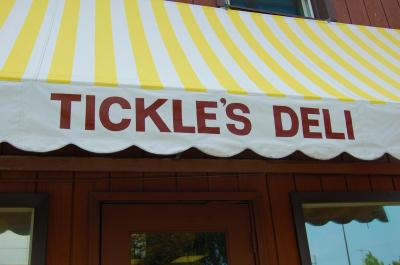 Walk into Tickle's Deli on any weekday afternoon and you'll likely have to wait in line. The local sandwich shop, located on West 4th Street between State and Peach, is a staple of the Erie lunchtime economy for nearly thirty years. That is, until this past Tuesday.

On Tuesday, the city closed State Street from Third Street to Seventh Street. Through traffic from Peach Street and French Street was also blocked along the 4th Street corridor to make room for the main event stage at Roar on the Shore.

Roar on the Shore is the region's motorcycle festival that expects to attract more than 100,000 bikers and bike enthusiasts, according to its website. The annual event is organized by the Manufacturer and Business Association. It began in 2007.

Roar on the Shore is touted as playing a significant role in local economic development. Millions of dollars ride in and out of town during the four day event. But it might be more appropriately called an economic infusion than economic development since few sustainable artifacts outlive the weekend. There are no long term jobs created and no new amenities remain once the event closes on Sunday night.

But at the start of the lunch hour on Friday, Tickle's Deli was empty.

Tickle's owner Sue Wyant says that regular business is down at least fifty percent since Tuesday.

"We're small business. Small businesses can't afford this kind of disruption," says Wyant. "This used to just happen during Celebrate Erie because they put the stage down here. Now it's Roar on the Shore and Celebrate Erie, so we lose twice during the year."

Other businesses on the north end of State Street are also feeling the effect of the road closures and detours. Business has been slow north of 5th Street for several retailers and restaurants.

Kim Carideo, owner of the American Surplus Store on State Street, says sales are down nearly six hundred dollars from the previous week and traffic is significantly slower than last year.

"In the past we've been very busy with bikers on Friday and Saturday," Carideo says. "This year we haven't seen many bikers at all."

In previous years, State Street has remained open and bikers would ride and park along State Street north of Perry Square. However, this year event organizers used an event plan similar to Celebrate Erie in which they close State Street, creating a pedestrian mall between 4th Street and North Park Row.

"We understand why the bikers aren't coming down here," one business owner said. "They don't want to stray too far from their bikes. But that means we don't get much business down here."

In addition to road closures, the creation of a VIP area in front of the main stage has also created problems for State Street taverns. The VIP area is surrounded with eight foot high chain link fence and it includes its own beer and liquor concessions.

Summertime event goers are familiar with the city's laissez fare open container policy, which allows concert goers during Celebrate Erie and weekly block parties to wander from bar to bar with beverage in hand.

Have no fear, that policy remains in effect for Roar on the Shore.

However, the fence, erected curbside, prevents concertgoers from meandering on lower state street and instead keeps them tied to event vendors rather steering them toward the open doors of nearby establishments.

Much of the State Street/Roar on the Shore economy will no doubt eschew the criticisms of the business owners at the north end of State Street. But this microcosm of the local economy simply wants to reconcile the dissonance that comes from an economic infusion that seems to correlate with a reduction in their business.

So if you're going downtown this weekend, international travel rules apply: watch your step, don't keep your wallet in your back pocket, and buy something from the locals.