by Alex Bieler
View ProfileFacebookTwitterInstagramGoogle+RSS Feed
September 19, 2012 at 11:30 AM 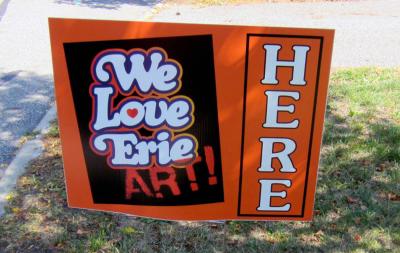 Big Leg Emma may not be based in Pennsylvania, but to them, the Flagship City is pretty much home.

The Americana quintet is quite familiar with the Erie area, playing shows everywhere from the Crawford County MusicFest to the Gathering at Chaffee's. Now, the Jamestown, N.Y. group is returning to its loyal local fans at the crooked i Friday, Sept. 28, returning to a town that's been supporting them throughout the years.

"When we first started the band, our crowd grew a lot faster in Erie than it did in Jamestown, so we kind of consider Erie to be our hometown, almost," said guitarist/vocalist Steve Johnson. "We really got close to a lot of our fans there and still are to this day."

After 10 years in existence, Big Leg Emma not only earned their local fan base with a rousing mix of bluegrass, folk, and rock paired with moving lyrics and harmonies, they also engaged with audiences, affecting people on a personal level.

"We connected with Erie and our fans very personally," Johnson said. "I mean, we're a personable band anyway. Everywhere we go, we like to get involved in the communities and with all of our fans, but our Erie fans even come to our children's birthday parties. When we started off the Big Leg Emma family, it started in Erie. We met all these people and it turned out great."

However, while Erie may act as an extended family to the members of Big Leg Emma, the band recently had a musical sibling move on.

Longtime violin player Amanda Barton stepped away from to group for personal reasons, dropping the group down to five members. With the constant stress that the music business can put on musicians, Johnson understands how much this career can affect both himself and others.

"It's life on the road," Johnson said. "It's not an easy life choice. It gets very difficult at times and sometimes you lose yourself and have to find yourself again."

Still, even with all the pressure that touring and the musical pursuit may place on him, Johnson says he won't stop any time soon.

"Myself, personally, I've tried not to go on the road for a year or so and it's just part of us," he said. "There's something inside of us that keeps us pushing and fulfills something inside of us to do what we're doing. We feel like we're doing this for a purpose and not selfish purposes either. We're trying to help people. We've had a lot of great stories about our music really helping people's lives, and that keeps us pushing."

With Big Leg Emma continuing to provide its adopted hometown of Erie with heartfelt music, this is a family reunion that you shouldn't skip out on.

If you haven't been able to tell, we here at the Erie Reader are a tad bit excited about the Governor's Awards for the Arts.

The celebrated statewide commemoration is making its first splash in Erie after 32 years in existence with the awards ceremony being held in the Warner Theater Thursday, Sept. 20.

Showcasing a quintet of Pennsylvania arts players including Apple Store-designer Peter Bohlin and locals Susan Hale Kemenyffy and Susan and Tom Hagen, the event is an opportunity to highlight the people who continue to advance the status of art across the Commenwealth.

With all the history behind the Governor's Awards for the Arts, Volunteer Co-Chair Tammy Roche says she is excited for the event to finally make it to Erie.

"It's never been held here before," Roche said. "For 32 years it has bounced all over the state, so yeah, it's a wonderful opportunity for us as a community to showcase all of the art that surrounds our lives, not just the art that hangs in a museum or the performances on a stage. It gives us an opportunity to kind of broaden the definition of art and show all of the art that we have."

The prestigious event also is open to the public without the need of a ticket. Starting at 4:45 p.m., artistic displays and performances will be held across State Street up until the start of the ceremony, which begins at 7 p.m. After the event, an after party will be held at the Erie Art Museum, featuring live music, food, a commemorative goblet, and more for the price of a $10 ticket.

While York, Pa. holds the record for Governor's Awards for the Arts attendance at 1,300 people, Roche thinks that our fine city can top that number.

"The Warner is the largest venue the Awards have ever been held in," Roche said. "I'm feeling a little competitive and I want to be sure that we have a bigger turnout than York."

Now that the Awards are finally in town after 32 years, here's a chance to show the rest of Pennsylvania exactly how proud we are of our local scene. We may not have been the first host of the event, but we can sure give them the best celebration it's ever been a part of.

Alex Bieler can be reached at aBieler@Eriereader.com