To Hell and Back: Hellboy is Both Insane and Boring 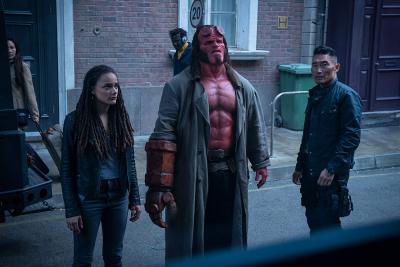 Fans of Guillermo Del Toro's Hellboy films should be disappointed to know that with Neil Marshall's (Dog Soldiers, The Descent) reboot now released, they will likely never see that long-awaited third chapter in the series. They should also be disappointed to hear that the new Hellboy film is a clunky and disjointed mess. Never before have I seen a movie with so much blood and carnage manage to be so utterly boring.

Following the adventures of an orphaned demon (David Harbour) recruited into a secret government paranormal disposal unit, Hellboy arrives in England on a seemingly routine mission to hunt some giants. However, he soon learns that there are far worse threats afoot as an evil Blood Queen (Milla Jovovich) has returned from the grave and is massing an army to destroy the world of humans.

The film feels like five different stories at once, taking us from one action setpiece to the next as fast as the smash-and-grab editing will carry us. It feels like the filmmakers tried to cram in as many of the graphic novel's storylines as possible. As a result, nothing has any time to stick with the audience and the bland characters and simplistic storyline don't help either. That being said, the only time the film comes alive is during those action scenes which contain so much over-the-top blood and gore that it becomes grotesquely fun (this is the director of Doomsday after all). Those ridiculous action scenes are enjoyable, but they can only carry this lame duck story for so long. — Forest Taylor

"The Bums Lost": 'The Beach Bum' is Nonsense Presented as Genius