To Infinity ... and Beyond!: Avengers: Infinity War 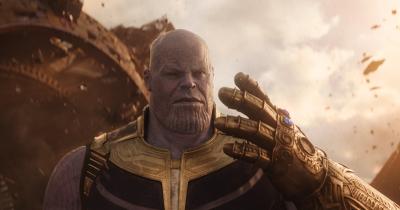 3/5 Stars
For ten years the "Marvel Cinematic Universe" has been working on an ambitious and unprecedented idea in movie-making: to make a massive series of unrelated films (nineteen and counting) all set in the same universe. It's been fun for the most part but it has all come to this; the moment when all the subplots and characters come together for the mother of all battles. Infinity War is here and it's a long, periodically entertaining and surprisingly bleak affair.

Finally revealing the story only teased to us in the first Avengers, this film follows Thanos (Josh Brolin), a purple monster on a quest to retrieve six magic stones that he needs to wipe out half of all life in the universe and only the Avengers (with a few new friends from outer space) can stop him. But can Earth's mightiest heroes stand up against a being with seemingly god-like power?

Featuring enough characters to give Robert Altman a run for his money and multiple plots involving magic axes, space travel and robots, it seems like Infinity War should be a giant mess, but its subplots all flow extremely well. Also, plenty of the action set pieces and emotional character moments are very effective, making the punishing runtime go by a little easier. My only complaint is the fact that the film goes much too far in being the "dark and gritty" entry in the series. Coming from a cinematic universe as fun and exciting as this one, the film is shockingly dour and frankly depressing. It's a bold direction to take but it may have gone too far with the death and destruction. I feel weird for saying this, but this is a superhero film that you may consider not bringing young kids to see. — Forest Taylor