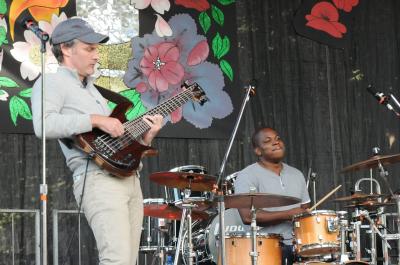 Grey has spent his life pursuing music and has worked as a music educator, composer, and producer (in addition to being a published author), and is well-known in the Erie scene and beyond.

From Pittsburgh, John Shannon has played all over, from New York City to California and even in Australia, said Steve Trohoske, owner-operator of Artlore Studio. "John is a jack of all trades," Trohoske continued. "Just a beautiful guitarist and a beautiful human being."

James Johnson III is also out of Pittsburgh, playing jazz for years with some of the "largest names in jazz," Trohoske continued.

"We have three extremely creative musicians," Trohoske said. "With that, [the mixing of their musical visions] it's always a bit unexpected [what they're going to play], even for them. There's going to be improvisation — who knows where it might go."

The show begins at 8 p.m. with a suggested donation of $10, Trohoske said. — Hannah McDonald