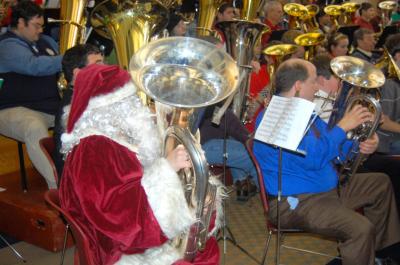 Still not feeling the Christmas spirit? It's not that your soul is cold and numb — maybe it's just that you haven't felt it reverberate through you yet.

It is in situations like this we turn to the nearest tuba, so that we might feel something again — in the rattling of the walls, floors, and/or our very bones. It's what former circus musician Harvey Phillips did when he orchestrated the very first Tuba Christmas in 1974, held at New York City's Plaza. A toned-way-down tribute to Phillips' tuba teacher William J. Bell (born Dec. 25, 1902), the event would go on to spawn thousands of similar concerts over the ensuing decades, consisting exclusively of low-brass interpretations of classic carols.

To this day, nearly 200 Tuba Christmases bellow forth from around the globe, so that even the whales deep beneath the sea may join in the joyful chorus. Erie's Penn State Behrend has been hosting a Tuba Christmas of its own for 19 years, becoming a bit of a tongue-in-cheek tradition for enthusiasts of tubas, sousaphones, baritones, and euphoniums everywhere. Audiences do not pay a single shilling to attend; instead, musicians register for the privilege of being heard — and felt.

There are no rehearsals in advance of the performance, participants merely show up and let it rip, hopefully having practiced. This year, their repertoire includes:

If your ears are ringing from all the high-pitched ring-ting-ting-a-ling and jingling going around, allow yourself to take it down a few octaves at Behrend's Junker Center, with the main event beginning at noon. Spectators who stay for the men's and women's basketball games will be treated to bonus content only a band mom could love.

Come Saturday afternoon, we can all be band moms.