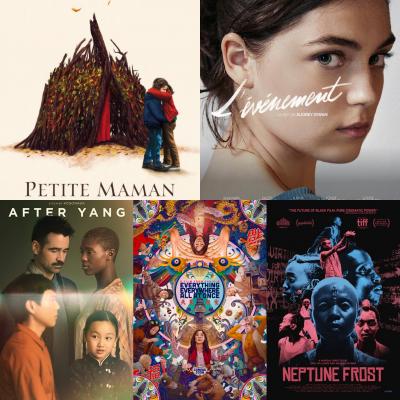 Céline Sciamma's follow-up to her masterful Portrait of a Lady on Fire (which I foolishly neglected to include in my 2019 Top 5) is another emotional look into the past that hits with a different, but no less powerful resonance. The story of an 8-year-old girl exploring her late grandmother's house and developing a friendship with a mysterious girl her own age she meets in the woods seems like a simple, care-free children's tale. As Sciamma gradually reveals to us the truth about this girl and the nature of their relationship, the story takes on a new emotional weight. The result is a blissful, imaginative shot of magical realism that manages, in its short runtime, to say so much about grief and loss but also familial love and the joy of youth. Sciamma has crafted a beautiful little fairy tale that can appeal young and old in equal measure. Truly a film for the ages.

Terrible changes in the U.S. courts have made this film, sadly, the most relevant film of the year, but Audrey Diwan's drama should be rightfully celebrated as a work of art beyond its timely political message. The story of a college student wishing to terminate an unwanted pregnancy in a time and place (early '60s, France) when abortion was illegal is a deeply personal but also tragically universal one. Diwan presents us with a protagonist just trying to live her life as she chooses, and what she must go through when that choice is taken away from her. The lengths she must go to are humiliating, infuriating, and scarier than any horror film. The film is a shout for millions of people who (as current events have shown us) still need to be heard.

Some of the best science fiction is about machines that live richer, fuller lives than humans and Kogonada's little family drama fits nicely with the best of the genre. When a little girl's companion (an android named Yang) breaks down, her father searches for ways to repair him and, in the process, discovers memories, experiences, and a life that Yang lived that his family never knew about. Kogonada's story is a classic rumination about the blurry divide between humanity and artificial intelligence and what it truly means to be human, but one that puts the connections amongst family and human emotions front and center. The unique mixture is like Blade Runner as directed by Hirokazu Koreeda. Great sci-fi manages to appeal to the mind and the heart in equal measure and After Yang does both masterfully.

4. Everything Everywhere All at Once

"The Daniels" (Daniel Kwan & Daniel Scheinert) managed to make a conversation between two googly-eyed rocks one of the most thought-provoking and powerful conversations in any film this year. And that's just one great aspect of this wonderful burst of creativity that truly delivers on its title. The story of a laundromat owner who must travel between dimensions to save the universe from a giant bagel is entertaining enough, but to have that story also say so much about family, love, regret, existence, death, and taxes makes the whole thing an absolute joy. Somewhere between The Matrix and Rick & Morty, Stephen Chow and Charlie Kaufman, this still manages to feel unique to The Daniels' own demented sensibilities. A challenge to the rest of the risk-averse film industry: let's see you be this smart about going this far over the top!

Saul Williams and Anisia Uzeyman have managed to create a post-colonial, Afro-Futurist, anti-capitalist, sci-fi musical and make all of those ideas come together in one coherent whole. That deserves respect on its own, but this story about an escaped coltan miner and an intersex runaway who connect through cosmic forces and form a hacker collective in the hills of Burundi to bring down the authoritarian government is an incredible rallying cry for the voiceless of the world. A film that attempts to transcend the limiting roles that money, society and even gender and sexuality have placed upon us, it is easily one of the most unique works in world cinema and it needs to be seen to fully grasp the ideas presented within. Also, it needs to be said that the music truly slaps.

Murina, Decision to Leave, Hit the Road, Pleasure, We're All Going to the World's Fair