This American Song and Black Moon Mistress are going head-to-head with trains.

by Nick Warren
View ProfileTwitterInstagramRSS Feed
August 16, 2017 at 11:30 AM 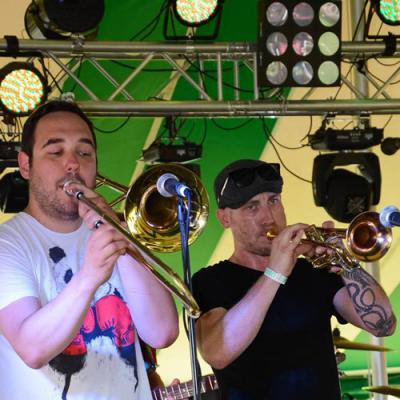 It's usually not recommended to go head-to-head with trains, but This American Song and Black Moon Mistress are up to the task. Making their way up to the trackside stage at the Brewerie at Union Station, the two bands will put up their dukes (in the form of decibels) against the occasional challenger (in the form of an oncoming locomotive).

Starting off the show will be newcomers Black Moon Mistress. The quintet, made of up former members of Abnegation, Village of Dead Roads, and Brother's Keeper, certainly knows how to throw a sonic punch. The band is fronted by singer Roxann Hudock and features guitarists Matt Till and Tony Lusianno, bassist David Steele, and drummer Zach Hudock.

Describing the formation of the group, Zach explained that "the band was created as a vehicle to make the type of music we love and want to bring to the Erie music scene. Our sound is heavily influenced by late '60s and '70s hard rock/proto-metal, doom, and occult rock, featuring strong female vocals over heavy rock. Kind of like if Stevie Nicks or Grace Slick sang for Black Sabbath."

This American Song has been a mainstay of the Erie scene for years, while continuing to evolve and grow as a band. With music videos and a new EP on the way, This American Song will no doubt continue to evolve and grow. With singer Jeff Phillips at the forefront, the group marries the talents of guitarist John Johnston, bassist Doug Phillips, drummer Pat Bolla, trumpeter Jesse Guerrein, and trombonist Larry Wheaton. Johnston noted that the band is even interested in "adding members, and scoping out and interviewing potentially more members." The band's lineup is inclusive however, often adding a guest vocalist or even the occasional theremin player. "We've set an arbitrary limit at 12," Johnston joked. All aboard. — Nick Warren