by Alex Bieler
View ProfileFacebookTwitterInstagramGoogle+RSS Feed
August 6, 2014 at 8:15 AM 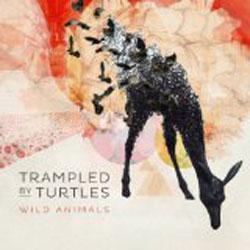 Since its inception, Trampled By Turtles has shown off the quick-pickin' prowess of its members, but on their seventh studio album Wild Animals, the bluegrass band's pace suits Turtles more than it Tramples. With fellow Duluth, Minn.-native and Low band member Alan Sparhawk serving as producer, Trampled By Turtles slows things down on Wild Animals, focusing more on tone and attempting to create a fuller sound instead of simply recording a studio jam. Fans of the band's lightning-fast bluegrass tracks will love "Come Back Home," but the majority of the album might bore speed-'grass junkies. Still, it's not necessarily a bad thing, as the band shows off some rather lovely moments, such as the hypnotic outro of "Repetition" when lead singer Dave Simonett repeats the line "Over and over again" to close out the highlight track. Wild Animals almost sounds like a band at a musical crossroads, but the trip is worth the effort.