How Community Schools are helping to uncover kids' talents 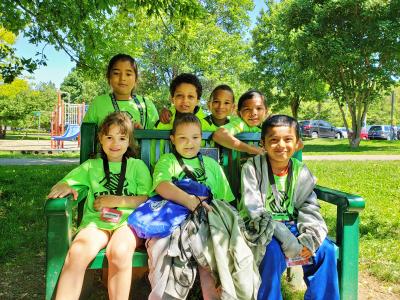 I like homework. In fact, I like homework so much that I once colluded with my Villa Maria Academy friends to do fake homework, after the teacher's pets in one class were driving us crazy. To curry favor with the teacher, they'd wave their arms and jump out of their seats to answer questions, write on the blackboard and collect the homework.

My friends and I devised a clever way to fluster the brownies by doing homework, even though we didn't have any. Thus, we created a small panic when one of us leapt up to collect our "homework" as "the brownies " (i.e., brown-nosers) frantically paged through their notebooks, trying to find something to turn in. (It helped that the teacher didn't realize that she hadn't actually given us an assignment.)

As we get ready for our 50-year high school reunion on July 20, which falls on the anniversary of the Apollo moon landing, I've been thinking about how my schooling has shaped me. Would my friends and I have been able to take small steps as women, or to make giant leaps for womankind, without the benefit of quality educations, including the opportunity to go to college? What would our lives be like if we hadn't been nurtured in supportive school communities from the time we were young?

When I led editorial board meetings and wrote editorials for the Erie Times-News, my ability to do actual homework served me well. As a City Councilwoman, I've taken the same approach to do deep dives into the issues. For example, in weighing how to revise the Local Economic Revitalization Tax Assistance ordinance (LERTA), I want to know as much as possible about how LERTA has worked in Erie and elsewhere.

Those who advocate for a broader, more generous LERTA have zeroed in on "economic" in the acronym, without scrutinizing the "revitalization" component. At the June 13 public hearing, one business owner grumbled about citizens who are "focused on social issues," rather than economic development. He said his biggest challenges are "almost always (about finding) people and talent." He didn't comprehend that past injustices often prevent the poor and people of color from finding opportunities to use their talents.

The day after the public hearing, I attended Forward Cities' national conference, "Advancing Inclusive Entrepreneurship," in Pittsburgh, at the invitation of Beth Zimmer, co-founder and managing director of the Innovation Collaborative. I learned a lot about the barriers that minorities face when they want to start businesses, but one comment really resonated. Instead of calling it "economic development," we should call it "community development," the panelist said.

That insight prompted me to think anew about Erie's Community Schools program, started three years ago by United Way of Erie County with financial and in-kind support from lead partners and from corporations and non-profit agencies.

Much of the narrative about Community Schools has focused on the efforts to provide health, wellness, and social services to children and families, so teachers can concentrate on teaching.

Community Schools have food banks and clothing pantries. Youngsters and their parents have access to counseling on site, instead of having to make travel arrangements while juggling work and family.

I have also heard good-hearted business leaders express their hopes that the Community Schools model will "crush" poverty and put students on the path to becoming part of the skilled workforce.

But this perspective has its limits. Do affluent families urge their offspring to take vocational training and skip college? I don't know; I'm just asking the question.

But thanks to a visit to Edison Elementary School, 1921 East Lake Road, I learned that the Community Schools program does much more than help students and families to overcome health and wellness problems.

Program staff and volunteers are sparking student interest in science, technology, art, engineering, and math. Through artists in residence from Erie Arts & Culture, children are exploring their creativity. The school garden is bounded by a splashy mural. On May 22, fourth graders billed as the Edison Players, performed in a musical, "The Friend Ship," facilitated by Trish Yates, the Erie Playhouse's education/outreach coordinator.

Bill Williams, president of the Playhouse board, is a chemist at Erie Water Works and has been singing since age five. "Learning lines and songs help broaden everybody's concentration powers," said Williams. "I think it helps kids in science and math, too. There's a natural flow."

Gina Rullo, Edison's assistant principal (and herself an active musician), said that through stage performances, children learn how to absorb and share information in a non-traditional way. Without the Community Schools program, the children would likely not have a chance to get to know the people from the Playhouse, she said.

The Community Schools program also benefits from beautification efforts. Volunteers from GE (now Wabtec) repainted the school walls in neutral colors, and U Frame It has matted and framed student artwork to hang on those walls. The art might be exhibited until the next generation of students enters Edison and they can point to a picture and say, "Look, there's Daddy's artwork,'' said Tami Krzeszewski-Conway, Edison's Community Schools director.

Krzeszewski and others working on the Community Schools program stress that staff development and parental engagement are key to the program's success.

"I really wanted to be part of that transformative change," said Harper, who grew up on nearby Chautauqua Boulevard. "I went to school here. I know some of the pitfalls. Hunger is a huge problem."

When children are fed, learning is "not the second fiddle," he said.

Karen Stoops, schoolwide support teacher, said that due to the Community Schools program, Edison feels like a neighborhood school again. The school breakfast program gives teachers the chance to converse with the kids. Surveys asking parents for ideas have enjoyed a 67 percent response rate. Wabtec employees are pumped to volunteer, said Christine Breski, a business operations specialist at Wabtec and corporate partner liaison. "It's neat to see how excited they are."

In focus groups, parents requested summer activities, so the Community Schools program is offering a summer camp, facilitated by the Boys and Girls Club. Camp began June 10 and runs through July 3. About 40 children are participating.

Previously, children might be treated to one field trip a year during the school year. During camp alone, they have visited Headwaters Park, Presque Isle State Park, Frontier Park, the Wabtec Innovation Center, and Asbury Woods. They also are taking part in a fishing excursion with the S.O.N.S. of Lake Erie. Every day, they also have activities tied to the books they are reading. At the end of the program, they will have read at least five books, if not more, and they get to keep the books, Krzeszewski-Conway said.

With every facet of the Community Schools program, the emphasis is to improve educational outcomes, and that data is being tracked, according to Laurie Root, United Way's senior vice president for resource development.

Erie's success story doesn't stop here. "We're now being looked at to provide technical assistance to others, because of the processes and the systems and the documentation," she said. "It's all based on academic success."

Liz Allen loved school so much that she and her friends snuck into Villa for a sleepover the night before graduation. She can be reached at lizallenerie@gmail.com.