Treat Yourself to Something 'Beautiful' at Warner Theatre

The story of Carole King, the making of a legend 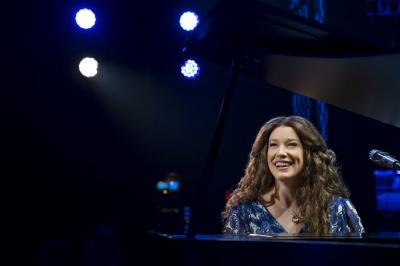 Musical prodigies tend to show their gifts when quite young. Mozart composed from the age of five. Alma Deutscher, who was recently featured on 60 Minutes, debuted her first opera at 10.

And Carole King began to garner notice at age three, when her parents discovered she had perfect pitch and would show off her talents to visiting friends.

Little did they know that decades later she would be one of the most popular and influential pop icons in the world, with 118 hits charted on the Billboard Hot 100.

The story of her rise to fame is likely surprising for those who weren't alive at the time of her smash hit album Tapestry in 1971; she worked behind the scenes throughout the '60s, writing song after song with her husband and collaborator Gerry Goffin, whom she had married when she was only 17. Before long they were also teaming up (and competing) with fellow songwriting duo Cynthia Weil and Barry Mann, who would remain lifelong friends.

This is the story that Beautiful: The Carole King Musical tells: the making of a legend and an icon, from her early days as a songwriter, her complicated and eventually failed marriage, and then the courage she finds to finally set out on her own — and make the earth move with her music.

The Beautiful tour has a two-night engagement in Erie, in the glorious Warner Theatre downtown, and it features a book by Douglas McGrath and choreography by Josh Prince, under the direction of Marc Bruni.

It is worth noting that, via the official Beautiful website, this musical — which originally opened on Broadway in 2014 (with Kennedy Caughell as Carole) — will be closing its Broadway run on October 27. All the more reason to treat yourself to something "beautiful" right here in Erie. — Cara Suppa