Trocks, Tights, and Tutus make their way to Mercyhurst 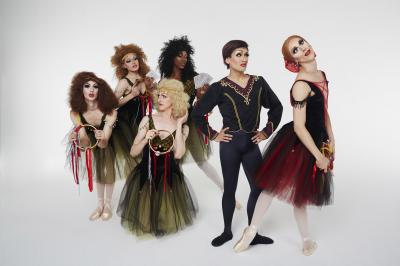 Ballet is thought to have a very specific target audience. However, Mercyhurst University will change that perception with an event that has something for everyone. Les Ballets Trockadero De Monte Carlo is considered the world's foremost all-male comic ballet troupe, and their talent and timing make their performances anything but a drag.

The troupe (often given the nickname "The Trocks") was founded in 1974, and got its start by performing off-Broadway. They quickly became well known, and began performing in dance festivals around the world. By 1977, the company was featured on television alongside celebrities like Shirley McLaine and the Muppets. They have since won many awards, performed in over 600 cities, and have even performed for members of the Royal Family.

The purpose of the Trocks was to present a parodic take on classical ballet, by having men perform en travesti (as women) with a combination of traditional dance and physical comedy. Make no mistake, these are not hairy, out of shape truckers falling on their faces — quite the opposite. These dancers are all professionally trained, perform in full makeup, and have fitted tutus, toe shoes, and yes, tights. The company performs a wide dance repertoire, including original works and comedic takes on classics such as Swan Lake (Natalie Portman better watch out).

The Trocks have given back by appearing in benefits for AIDS organizations, homeless gay youth in New York, and Thailand's Queen Sirikit's Scholarship Fund in Bangkok, which helped finance schooling for impoverished families. They continue to tour, and put on shows that seek to entertain ballet fans from serious to casual, from those who have posters of Rudolf Nureyev on their walls to those who just went to their niece's recital of The Nutcracker. — Claudia Rose