As some officials like Fauci, radiate calmness, Trump falters without large crowds 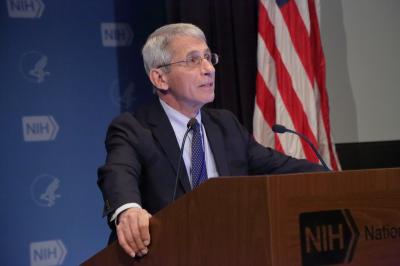 National Institute of Allergy and Infectious Diseases (NIAID) on Flickr

Let me start with this: Dr. Anthony Fauci is a national treasure. I tweeted that after the Saturday, March 21 Presidential Press Briefing. He's a comforting presence in times like these, a steady hand on the wheel of a car on fire without its brakes being driven by a driver who shouldn't have a license to operate a Big Wheels trike. But I digress…

Fauci, though, before I stop digressing, is keeping the nation informed, offering calming yet steady guidance in a time when anxieties are peaking as the spread of COVID-19 continues. What's more, he's been at this longer than many likely realize.

With an administration whose pendulum swings from extremes -- nothing to see here! to the sky is falling! -- Fauci has been the constant. And he's been fearless in his pursuit of helping the country.

In the Washington Post, columnist Karen Tumulty reminds us that "Fauci has already shown how important it is to hit a microscopic enemy with a sledgehammer of truth. A yet-untold number of Americans will be betting their lives on him to do it again." Setting up the "again," Tumulty recounts Fauci's heeding of the call to duty during the Reagan administration when he took over the National Institute of Allergy and Infectious Diseases (NIAID) in 1984.

To read about his prior impact, check out Tumulty's March 12 op-ed.

It's becoming increasingly challenging to not see briefings morphing into quasi-Trump Rallies.

Let's note: There's a marked difference between teleprompter President Trump and MAGA rally President Trump. One is stiff and largely unemotive. The other is animated, energetic, growing more energetic as the cheers feed him.

Say whatever you will about Donald Trump, but he is at his peak Trump-ness when in front of hundreds if not thousands of his supporters.

So this has to be a tough time for the President. Leading by example, he can't host a rally. He can't interact with his supporters. He can't find an hour or so to be himself.

Right now, all he has is a room full of reporters and his team. And that room has been noticeably thinned out with social distancing leaving a vacant chair in between folks.

Right now, this is all he has for an audience, and he has it daily. So praises from his cabinet have replaced the stadium applause, but to what effect?

Further, it's hard not to notice the increasing creeping in of "Sleepy Joes" hurled for his presumable opponent in November, or his attacks on the media. For the latter, one needn't look further than his berating of NBC's Peter Alexander on Friday, March 20.

Alexander asked what otherwise seemed to be an innocuous question: To those afraid, what do you tell them?

Something more: We know these to be trying times, but together, we will get through them.

Anything, really, other than, "I'd say that you're a terrible reporter, that's what I'd say."

Even if you think Alexander was leading the president, or unfair in his question, there's the option to take the high road and answer simply rather than to attack. Because at the end of it, I doubt anyone afraid or scared felt any better knowing the president thinks Alexander is terrible at his job.

But all of that aside, it's been challenging, too, to watch as the president continues to contradict his own experts at these briefings, Fauci included.

Some media outlets have called upon the president to stop hosting the briefings, not mincing any words about how they see the events going.

Others, like James Fallows did on Twitter, have called upon cable stations to stop airing the briefs. Fallows went on to list others who've lobbied the same.

I know there are more. Pls add names and links in replies. https://t.co/VanxbSEJvB

Assuming that Trump won't stop them and outlets won't stop broadcasting them, I'd issue the challenge to outlets to run a live fact-checker as a scroll along the bottom of their screens.

Doing so would show us who takes the dissemination of information seriously. And hopefully, those watching along at home would take serious note.