Inside the piping plover's remarkable return to Presque Isle 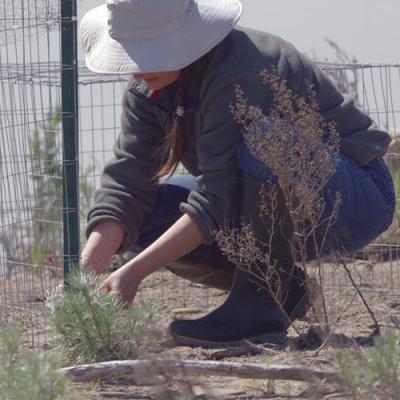 On May 11, under gloomy skies that promised rain, with temperatures around 50 degrees and wind gusting to 30 miles per hour, I witnessed what no one has seen at Gull Point at Presque Isle State Park in more than 50 years: A male and female piping plover together on the shore of Lake Erie. These endearing 7-inch pale shorebirds once nested on Gull Point, as recently as the mid-1950s. By 1984, the Great Lakes population was practically decimated, however. Only 17 known breeding pairs (34 birds!) were known to exist. The bird was placed on the federal endangered species list that year.

So, on that chilly, gray morning I was potentially witnessing avian and conservation history.

The male chased off any bird that dared get near the female and did an elaborate mating flight above her. He flew in long oval-shaped patterns, singing his piping call, with wings rocking side to side, the better for her to see his ploverly fitness.

My heart was pounding as if I was running from a grizzly. My knees turned to jelly and my legs quivered. Despite my nerves, I knew I had to stay clear-headed and calm. I watched them from a good distance through my spotting scope, then alerted the proper agencies required by predetermined protocols for an endangered species. I took one quick photo through my scope and backed off to give the budding courtship its space. 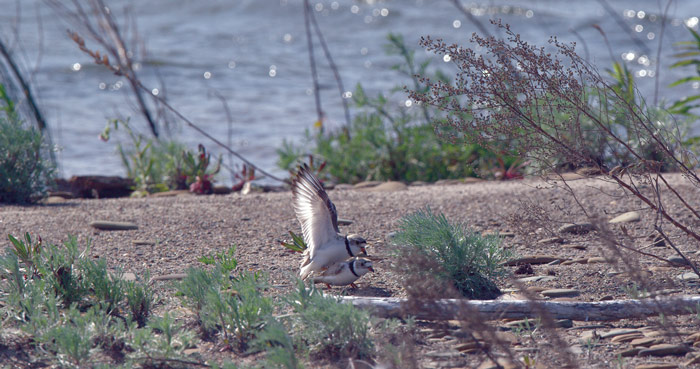 Getting to this moment was no small feat. In those early days of the 1980s, rejuvenating the population took hard work on the part of many. Across the Great Lakes, teams drew up piping plover reviews and recovery plans.

Getting to this moment was no small feat. In those early days of the 1980s, rejuvenating the population took hard work on the part of many. Across the Great Lakes, teams drew up piping plover reviews and recovery plans. One of the major challenges they faced, besides a sparse population, was the loss of appropriate nesting habitats to human development and recreational use. Gull Point's habitat and challenges made recovery there mostly a dream for local conservationists like Jerry McWilliams and the late Jean Stull-Cunningham

The greatest challenge Stull-Cunningham, McWilliams, and Gull Point faced was human disturbance. Prime nesting season is also beach season. The 67 acres of palustrine sandplain at Gull Point — a sparsely vegetated ecosystem that occurs on moist sandy flats  — saw frequent boaters moored there to picnic and play. Any ground-nesting birds, like plovers and common terns would find their potential nest sites filled with chairs, blankets, volleyball nets and more. McWilliams tells of seeing a small chamber ensemble there once, brought over by boaters for their listening pleasure.

It was only after a male piping plover was spotted exhibiting courtship behavior in 1992 that park officials, under pressure from Presque Isle Audubon, Sierra Club, and other conservation groups, considered closure of the point. But the two-year campaign for closure generated some rancorous quarrels in the media and in person.

According to a July 26 editorial in the Erie Times News, "Boaters who liked to pull up on Gull Point warned darkly in 1992 that if the point was denied to boaters, they would be forced to travel to New York or Canada 'just to have our fun and relax the way we used to.'" They also suggested that since there were more boaters than birders, it was their right to use the space. McWilliams was booed off the stage at a public hearing and, in 1993, his tires were slashed in a parking lot at Presque Isle.

Eventually, the boundaries for the closure area were set, signs were erected, and in 1994, the point was closed and designated a PA Department of Conservation and Natural Resources (DCNR) natural area. A trail leading out to an observation platform remained, allowing anyone willing to make the trip to do so.

When a male plover was seen acting in a territorial way in 2005, the PA Game Commission stepped up its interest in possible recovery. A planning team convened in 2007 with members from the Commission, PA DCNR, the Army Corp of Engineers, Western Pennsylvania Conservancy and other stakeholders. Work to enhance the habitat followed. The team has now solidified into a group meeting twice a year via conference call.

Twenty-three years later, I am watching the fruits of that labor, a male plover with a potential mate. Would the male successfully woo the female into staying?

Yes, he did. She stayed, and history was made.

By May 15, we could call them a pair, as they were actively courting. By May 23, it appeared that the birds were starting to incubate eggs, so PA Game Commission biologists arrived and installed an exclosure over the nest area. This 4-by-4 foot "cage" has holes large enough for the plovers to pass through, but too small for ground predators such as raccoons and coyotes to get into. Once it was established that incubation of three eggs had begun, I settled in to observe nesting and wait the approximate 28 days until the chicks would hatch.

That serenity of my nest watch was interrupted, however, by a very exciting and unimaginable development. On May 27, a second male discovered Gull Point and a week later, another female arrived. They courted quickly and had a nest with four eggs established by the second week in June. That nest also received a protective exclosure.

After a 50-year dearth, Gull Point suddenly had two active nests. The recovery team was beyond ecstatic.

Incubation at both nests continued until the morning of June 25 when the chicks in the first nest hatched. One, then two, tiny chicks, no larger than the size of cotton balls darted about unsteadily, exploring their new world. I felt like grandchildren had been born. Before the third chick could completely hatch and dry off, though, the weather stepped in to darken the mood of the day.

A front brought in high wind from the southwest that pushed water rapidly up into the inlets of the flat beach profile, causing water to come precipitously close to the second nest.

A flurry of texts and phone calls ensued between myself and Cathy Haffner, the lead field biologist for piping plovers at the Pennsylvania Game Commission. Soon, field biologist Tim Hoppe braved the choppy waves and high winds to arrive via boat. By that time one of the adult birds was frantically racing back and forth at water's edge looking for the eggs that had floated away from a submerged nest. Hoppe quickly located them, securing them in a padded container. Unfortunately, we could not return the eggs to the nest and they were transported to a captive-rearing facility in Michigan. (Two of the four eggs survived to hatch in Michigan and the chicks were released there.)

In all, I spent six hours at Gull Point that day. And though I was certain I had seen three tiny plover heads near the first nest, a third chick was never seen again. High water had inundated that nest for a short time too, and the male was still sheltering something that he moved up-beach when the water came. In the days to come, I would still look for that third chick, hoping for the best, but it may have been lost to the water.

On July 3, a team of PGC biologists, Jerry McWilliams, and myself gathered at Gull Point to band the two chicks. Because Great Lakes piping plovers are endangered, they receive small bands placed around their legs in unique combinations. These bands help researchers know more about where the birds go as they migrate, nest and winter. For example, thanks to his bands, we were able to know that the male from the first nest hatched in Michigan in 2015. The other three plovers were all birds that hatched in Ontario, Canada. 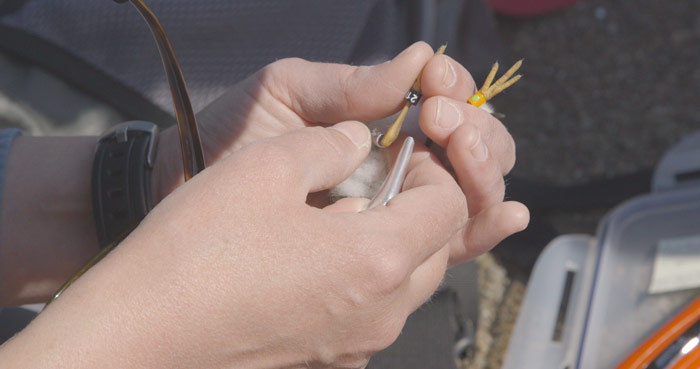 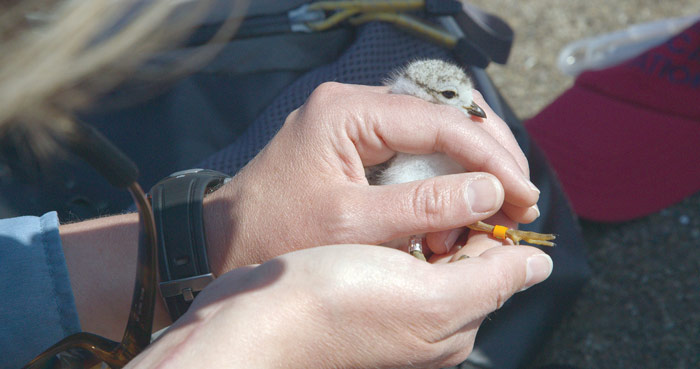 After banding was completed, Haffner handed me a small cloth bag that held a plover chick. The other bag was given to McWilliams. We knelt down in the sand, gently pulled the chicks out, and aimed them away from us towards their nervous parents nearby. I could barely feel the weight of the chick in my hand. I bent over, kissed it on the top of its head, and on the signal, McWilliams and I set them down softly and opened our hands.

As we watched them skitter away, I turned to McWilliams and said "great job."

I would guard these two chicks for another month and a half. They grew stronger, bolder and I celebrated the first time I saw one take a short flight-hop. On August 11, the last day of my seasonal job, the adult plovers were long gone but the chicks were still there. I sat down on a log at a safe distance down the beach and took a long lingering look at them. They went about their business of foraging for food, chasing other birds and each other, flying in short bursts with more assuredness than they had before. Acting like the "teenagers" they now were.

They weren't far from the place I first saw their parents. Eventually, with a light rain falling, I wished them luck and bade them farewell. And, yes, I cried as I walked away for the last time.

People are rightly thrilled to know that the bald eagle population has recovered and many are now frequenting our area. I would counter, though, that the successful re-nesting of these small, but very rare and distinctive birds is an even greater triumph. It signifies the increasing health of our lake, the successful improvement in habitat, and the continuing growth of the Great Lake plover population. That population still has a long way to go to before it can be taken off the endangered species list, but for now, right here in Erie, piping plovers have finally came home.