U Frame It's Beautifying Business Model

This welcoming shop has put its neighborhood in the right frame of mind for decades. 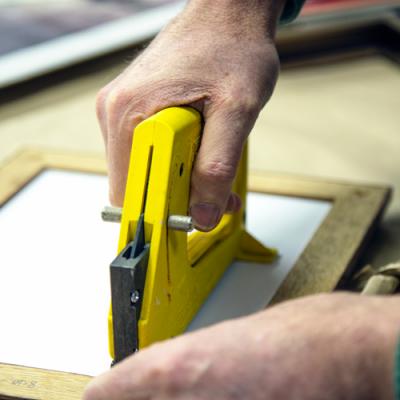 Matt Lebowitz and Linda Trohoske greet me as I walk into U Frame It for the first time. Linda is busy cutting matting in the back on a table stacked with pieces of frames and rulers. She's the only employee – other than Lebowitz and his wife Phyllis Mashyna who are co-owners – and has been working at U Frame It since 1997. I ask what her position is and she grins, scrunching her shoulders while looking at Lebowitz; she doesn't really have a title. "Are you sort of like a manager?" I ask. They both laugh a bit. The consensus is that she's kind of like a manager but doesn't want to be called one (perhaps in fear that it sounds too formal).

This scene is exactly how you'd expect a mom-and-pop shop to be run, and it's happening right here in Erie, nestled in a west side neighborhood (that Lebowitz refers to as the "western gateway to downtown Erie") on the corner of Liberty and West 8th streets.

It's the sense of community and pride for Erie that the owners exude, and the laissez-faire ambience of the shop itself, that make U Frame It so welcoming. They're a neighborhood business. And they love what they do, where they do it.

It's the sense of community and pride for Erie that the owners exude, and the laissez-faire ambience of the shop itself, that make U Frame It so welcoming. They're a neighborhood business. And they love what they do, where they do it.

The origin of U Frame It started in the early 70s, when Mashyna's family (originally from Erie) went on a trip to Colorado to visit her sister who was living there at the time. Her sister thought her father, Mike, would enjoy a matting/framing store in town, as he often framed photos in their basement and also enjoyed woodworking.

Mike enjoyed the experience so much that he decided to go into the framing business (after years of business and accounting jobs). In 1975, U Frame It set up shop in Erie as a do-it-yourself matting/framing company.

In May of 1988, Mike passed away. Ginger, Mashyna's mother, contacted her in San Francisco where she'd met and married Lebowitz (a New York City transplant), to see if they'd be interested in moving to Erie to take over the business. The duo decided to leave San Francisco – where Lebowitz had been working as a photography developer – and move to Erie later that year.

A decade later in 1998, they began renovations on the shop at its current location, adding on another section to the building. When they stripped the building of its exterior, they discovered black tile underneath dating back to the early 1930s, when it was a Weiblen Pharmacy/soda shop.

The renovations went so well that in 1999, Downtown Erie Partnership awarded U Frame It with a preservation award. Now, the business is receiving a Greater Erie Award from Preservation Erie this April.

Lebowitz is excited to see the progress Erie has made on preserving historic buildings, such as the Boston Store and Renaissance Centre. That is, it's better late than never. "Erie has been advancing … It doesn't have to be Cleveland or New York. It's here and it's what we know," he concludes. Not that he thinks we should settle on Erie's present socioeconomic conditions; Lebowitz wants to see Erie become a bigger force of culture and business, too, and insists that it can happen if we stop grumbling about it and do something. "He's one of the biggest ambassadors of Erie and he's from New York City," says Mashyna.

Mashyna and Lebowitz stay involved in the Erie community at large. They're involved in Our West Bayfront, an initiative started by Gannon University, with a mission to "enhance the quality of life in Erie's West Bayfront neighborhoods by promoting civic involvement, thoughtful development, historical preservation, and neighborhood pride." Despite the popular belief that this part of town is "bad," it's actually more vital than most believe. "Just because it doesn't have a Starbucks doesn't mean it isn't a great neighborhood," says Lebowitz.

Mashyna is also involved with an initiative called Bay City Gardeners, a group of Erieites that come together over the love of gardening. They put on a regular garden walk through Erie properties that are later open to the public for a small price. "We care about the city," says Mashyna. "We're investing in the city. We're trying to make it a better place."

In addition to their more concrete ways of revitalizing Erie, they're also interested in the social dynamics of Erie and its people. Lebowitz hosts a monthly social gathering event called Hoppy Hour with Uncle Dulachan at his favorite local pub and brewery, Lavery Brewing Company. 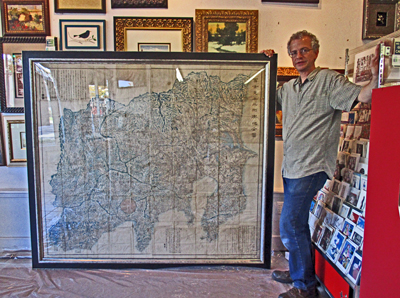 The idea for a community happy hour began on Lebowitz's birthday in 2012, before Lavery officially opened a pub and there were only "growler hours" where people could take their growlers to fill up and then leave. Having done this many times with his friends (and then scurrying off to someone's basement to play pool, or to an Otters game) he thought it would be nice to stay in the parking lot to celebrate his birthday, instead of leaving for a dinner reservation (where he was going to order the duck). He decided to use the money he'd spend at the restaurant and buy everyone pizza.

"That in a nutshell is how I feel about how to do life," he says.

Once Lavery Brewing Company's pub officially opened, Lebowitz began inviting groups of people on Facebook to meet and chat. Anyone is welcome, and others are encouraged to invite whomever they'd like, as well. "It's about meeting new people … and having great conversation and beer," he says. (By the way, if you're wondering, he thinks Lavery's Dulachan is the "best beer on the planet.")

It's the community of people that Lebowitz and Mashyna have helped to form that makes U Frame It a unique business. They look forward to meeting their new and repeat customers and take pride in the work they've done. "We run into people sometimes who say 'Oh, you should see all the things I have in my house framed by you,'" says Mashyna. "We hope we give a great experience to every customer."

Making Erie a great place to live is certainly a priority for this couple. But that can't happen unless people are self-aware, explains Lebowitz. "This year's mantra is 'pay attention' … everything starts with gratitude … if you pay attention to what's going on, you have a lot to be grateful for and you can then create change you want to see. You can't start out lacking and then feel you can do anything else."

The next Hoppy Hour with Uncle Dulachan is Feb. 19 at Lavery Brewing Company. Find Matt Lebowitz on Facebook for more details.

Bay City Gardeners is a community organization that hosts annual garden tours. For more information or to participate, check their Facebook page.

The mission of Preservation Erie is to promote, preserve, and enhance the distinctive character of greater Erie through community-based planning, design, and historic preservation.

Downtown Erie Partnership is a non-profit designed to revitalize the Erie downtown by improving its image, business climate, physical environment, and design.