A conversation with Caitlyn Strohmeyer, president of TransFamily of Northwestern PA. 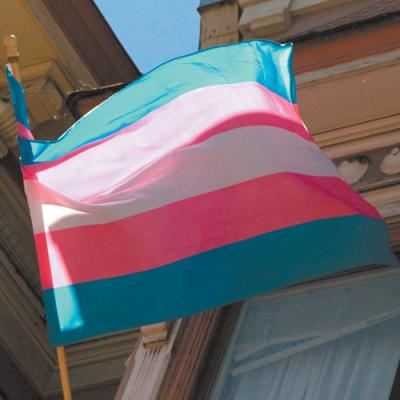 In 2009, Erie native Caitlyn Strohmeyer decided to make her transgender identity public. She had an honest conversation with her family, changed her mode of dress, and initiated a bold new chapter in her life. However, in the aftermath of such substantive changes, she initially struggled to find local support that met her needs.

Accordingly, she took frequent trips to Ohio, where she discovered an organization called TransFamily of Cleveland and quickly "found a home there." Her frequent visits left her feeling much more confident. "After about six months, I realized that I really wasn't going as much for myself anymore. I was going to support others," she claimed over coffee on a sunny Wednesday morning in early June.

After a year and a half of traveling to Cleveland, she decided to bring the organization's model to Erie. To make this happen, she partnered with Hilary Copp and Will Koehler, two professors at Edinboro University, and TransFamily of Erie was born. The organization offers a safe place where transgender, gender non-conforming, gender-questioning, and intersex people can come together to support each other. The meetings occur every fourth Saturday of the month, between 2 and 5 p.m., at the Mental Health Association of Northwestern PA (11th and Peach).

Strohmeyer claims that their primary goal is "supporting the community by providing therapeutic and peer-to-peer support." Typical meetings "are open to anybody. Family, friends, allies, medical professionals. And we average probably 20 to 30 people per meeting. We've had as many as 50 and as few as five." They also prioritize community education: "We've had people who are kicked out of restrooms and things. When I find out about it, I'll approach the business owner or manager and explain to them that we have a discrimination ordinance and that they're breaking the law. I can also help them to understand the community better."

As the organization's president, co-founder, and facilitator, Strohmeyer often leads outreach events at places like Mercyhurst University, Wattsburg School District, and Saint Vincent Hospital. These appearances are designed to help people understand gender diversity, and to "get out of the mindset of a gender binary, where everything is male or female, since there is a whole spectrum in-between." People also learn "how to be a good ally – ways to be respectful, how to treat people, and how to talk about the community to others."

Her outreach often focuses on "the marginalization that the community experiences," which can be alarmingly severe. According to a 2014 report from UCLA's Williams Institute, 41 percent of transgender people in the U.S. will attempt suicide at some point in their lives. The number goes up to 65 percent for "those with a mental health condition that substantially affects a major life activity." Their survey tallied data "from 6,456 self-identified transgender and gender non-conforming adults," and found that 57 percent of the respondents had family members who refuse to speak to them, 60 percent had a doctor or health provider refuse treatment, more than half had experienced discriminatory harassment at work, and a shocking 69 percent had experienced homelessness.

A 2015 Human Rights Campaign report concluded that there were at least 53 transgender murder victims in the U.S. between 2013 and 2015. Eighty-seven percent of the victims were people of color; 74 percent were under the age of 35. And these are only the cases we know of.

Transgender people are often physically at risk as well. A 2015 Human Rights Campaign report concluded that there were at least 53 transgender murder victims in the U.S. between 2013 and 2015. Eighty-seven percent of the victims were people of color; 74 percent were under the age of 35. And these are only the cases we know of.

Fortunately, TransFamily of Erie is growing larger in scope and more adept at addressing needs. In the past year, two smaller groups have emerged under its umbrella – TransFamily of Meadville, and TransFamily Youth, which is geared toward people up to age 21. The larger organization, which now goes by the name of TransFamily of Northwestern PA, recently established an 11-member board to pursue non-profit status as well.

When asked about the most urgent needs in our community, Strohmeyer quickly mentions access to medical care: "We currently only have two doctors' offices in Erie that will prescribe hormones. And before November or December, we didn't have any." She also notes that economic troubles can escalate this need: "A lot of the transgender community is underprivileged, so they don't have the means to travel to Pittsburgh or Cleveland for medical care – if they have insurance at all."

TransFamily of Northwestern PA actually played a crucial role in expanding local access to hormone treatment therapy. Strohmeyer explains that "since we didn't have any doctors in Erie, I would always refer people out to doctors. I found out about a doctor named Martin Seltman in Pittsburgh, so I started referring people to him." As Seltman's Erie-based clientele escalated, Allegheny Health Network eventually intervened to find nearby doctors who were willing to treat transgender patients. An Erie-based general practitioner named Bradley Fox soon began offering his services.

Seltman eventually visited Saint Vincent Hospital to conduct training about medical protocols for trans people, and endocrinologist Luis Aparicio's assistants started serving trans patients soon after. Strohmeyer is cautiously optimistic: "Now I have the nurses at Saint Vincent reaching out asking about how they can treat patients more competently. But we need to get more doctors on board to actually prescribe hormones. That's a big goal for us."

I asked Strohmeyer what advice she might have for readers who are questioning their gender identity. She emphasized the need "to find a counselor or a therapist. Somebody to talk through it who's knowledgable. There are five or six local therapists that I refer people to who are competent in recognizing gender identity issues."

She also offered reading recommendations, citing Mildred L. Brown's True Selves: Understanding Transsexualism—For Families, Friends, Coworkers, and Helping Professionals as a book that really changed her life, and expressed deep admiration for the work being done by Mara Kiesling at the National Center for Transgender Equality.

Her simplest bit of advice was, perhaps, the most important: "Come to a meeting!"

To learn more about TransFamily of Northwestern PA, visit their Facebook page: facebook.com/TransfamilyOfNWPA/