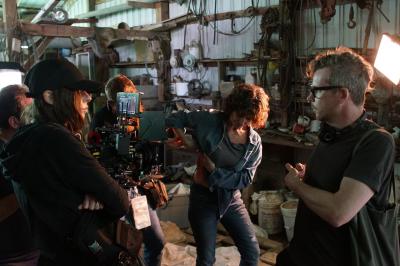 The Erie movie scene is about to emerge from the underground.

Unearth, a locally produced eco-horror film directed by John C. Lyons and Dorota Swies, follows a feud between two neighboring farm families after one of them folds to fracking. Of course, buried deep within the Northwestern Pennsylvania bedrock is pure nightmare fuel — rarely has carbon left anyone feeling so taxed. Two prominent indie film festivals have caught wind of its supernatural gas, meaning our corner of the world should soon find itself on the cinematic map.

Unearth will first premiere worldwide at Canada's Fantasia International Film Festival on Aug. 20. Fantasia, the biggest genre film festival in North America, will transpire virtually over the course of two weeks (through Sept. 2). Shortly thereafter, it will debut in the United Kingdom during Grimmfest, named one of MovieMaker Magazine's Bloody Best Genre Fests in the World. During that (also virtual) event's run from Oct. 7-11, Unearth will vie for a prize in 10 categories, including Best Film, Best Acting, Best Cinematography, Best Visual and Special Effects, and more.

The entire film was shot locally, and funded in full by private investors, 95 percent of whom live in Northwestern Pennsylvania. Its subject matter hits close to home for many of the cast and crew, especially Lyons, who says: "I spent my entire youth on farms and in the woods of Pennsylvania and learned the importance of the land and our relationship to our environment. After viewing the effects of the oil and gas industry on my beautiful state in documentaries like Gasland and Triple Divide, and evidence of years of cover-ups regarding water contamination caused by fracking, I was inspired to make this movie."

Grimmfest festival organizers praised Unearth's "real feel for landscape, location and community, nuanced and detailed characterization, naturalistic dialogue, and strong performances," while Fantasia co-director Mitch Davis called it " beautifully put together, vivid and compelling, with genuinely startling bursts of shock and atypical horror." Swies is confident that her film will strike a nerve as a "portrait of contemporary America" for many "everyday working class families."

After viewing the trailer, anxious moviegoers will be curious to learn what the frack is going on.