Can the Art of the Deal Trump a Proven Public Record 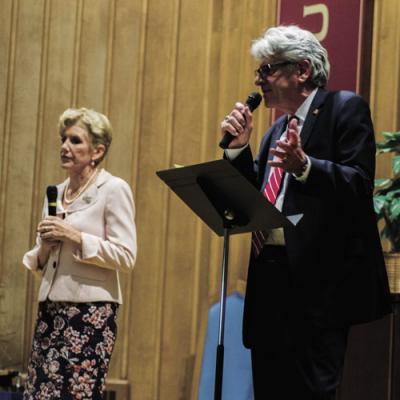 To better understand the Erie County Executive race is to understand what it is not: the City of Erie's mayoral race.

For certain, though, more attention has been paid to the mayoral race because it does not feature the one thing the county executive race does: An incumbent.

Since 2006, Erie residents have seen three county executives to its one mayor, and no matter the outcome on Tuesday, Nov. 7, City Hall will have a leader who hasn't been there before. Erie will have a new mayor, not because the last was pushed out by the ballot, but because of term limits.

There is, however, a 50/50 chance that none of the furniture on the fifth floor of the County Courthouse needs to be moved, as Republican Art Oligeri is challenging incumbent Democrat Kathy Dahlkemper.

Oligeri, 65, is running to ensure that in one way the trend continues. Dahlkemper, 59, is running to set a new trend: Become the first county executive since Judy Lynch to hold the office for more than one term.

Lynch, a Democrat, took office in 1982 and held the post until 2002 when she was ousted by Republican Richard Schenker. Four years later, Democrat Mark DiVecchio took the helm. Another four years after that, Erie voters elected Democrat Barry Grossman. And in 2013, Dahlkemper bested Grossman in the Democratic Primaries and went on to defeat Republican challenger Don Tucci to become Erie's current county executive.

While both mayoral candidates will be judged on the new policy they're championing to bring to City Hall, Erie County voters will have Dahlkemper's record and continued vision to compare to Oligeri's untested opposition.

How did we get here?

Oligeri, who ran for County Executive in 2005 and lost during the primaries, took the early lead in this year's primaries and never quite lost it. However, Erie political newcomer Brenton Davis, 33, pulled within a couple hundred votes by the night's end, enough to force a recount. Oligeri, a small businessman, kept the narrow lead but gained Davis's support, as the contractor who ran a populist-style campaign, pledged his backing the Friday the vote count was settled.

Although Dahlkemper faced opposition in May's primary, she racked up more than twice the votes as her challenger, Joseph Curlett, a 68-year-old retired state employee.

Where are we going from here?

That's the question Erie voters now have to ask themselves. And an answer therein can be determined by electing the known versus the unknown. And a quick visit to each candidate's website is a good start in weighing that.

At KathyDahlkemper.com, visitors will find a fleshed out "Issues" page divided into 'Record' and 'Vision.' There, the Dahlkemper camp features four sections: Jobs and Economy; Safe, Healthy, and Vibrant County; Collaboration; and Good Governance.

Under Jobs and Economy fall five bullet points for "Record" and four for "Vision." For Safe, Healthy, and Vibrant County: 10 and three. For Collaboration, seven and five. And for Good Governance: Seven and one.

There's plenty to see and consider there, but the short of it is that Dahlkemper has had successes as well as challenges while in office. And depending on your political persuasion, some of those successes can be seen as challenges and vice versa.

Take, for instance, the community college issue. If you believe that Erie County — the largest area not served by a community college in Pennsylvania — will benefit by having additional educational resources available to its residents, then that's a success. If you think we won't and that we're fine as-is and that the addition of a community will be detrimental to the county, then it's a challenge.

Nevertheless, she has a record of accomplishments, and it's public for us all to see and judge.

At ArtForErie.com, visitors will find three key sections: About Art, Responsible Spending, and Lower Taxes. Of note on the former, Oligeri leans heavily on having never lived in a different zip code than the one he was born and raised in. Of note on the second and the latter, Oligeri presents his vision as the opposite of Dahlkemper and her record. That is, what she is, he's not. And what he is, she's not.

What's lacking — and has been further illustrated during public forums and debates — are specifics on policy Oligeri might plan to pursue and actions he would take as county executive. This shouldn't come as a surprise, though, since challengers in political races often benefit by keeping their messages simpler: Don't like what's happened? I'm your person. Want change from what you've had? That's me, too.

What is of significant note, though, is what impact the 2016 Presidential Election will have on voters and how they cast their ballots in this election. If mid-term principles can be applied here, one might assume the pendulum will swing not closer to but farther from the party that just won. That is, the county having just turned red would be inclined to purple the hue if not go more noticeable out of the red and into the blue.

Given the impact the non-traditional Trump movement's had on the parties, on voters, on the election process, on essentially everything, it's hard to determine whether this trend will hold, especially since Oligeri aligns himself somewhat with Trump.

During the debate I co-moderated at the Jefferson Educational Society with Pat Cuneo, Oligeri praised Trump's business approach to politics. Like Trump did on the campaign trail — and still does in office — Oligeri exudes a confidence in being a solutions provider without offering specifics on how solutions will be provided. In an enthusiastic but hyperbolic declaration, Oligeri told the audience he can do the impossible.

Between now and Tuesday, Nov. 7 , additional debates and forums will be held, ads will saturate the airwaves, and citizens will get their first look at campaign finance reports.

In regards to the latter, out-of-county money was injected into local elections in 2016. Whether it's present again — how much and where from — remains to be seen but will be telling as to whether Erieites are the only ones who care about the outcome of this election.