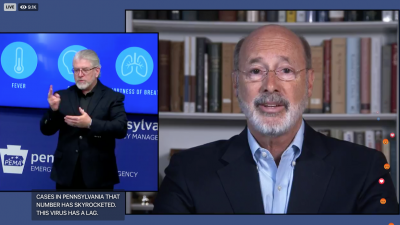 Pennsylvania's Secretary of Health Rachel Levine began the briefing, citing that while there were 276 new cases yesterday, with 560 new cases today. This almost exactly represents the exponential rise, doubling the number of cases in a single day.

Most positive cases came from those who were 50 and older, making up about 46% of total cases. Importantly though, 39% are from the 25-49 year age bracket. Levine stressed that younger adults must not be complacent about susceptibility to COVID-19.

So far, 16,441 have tested negative to date in the Commonwealth. 170 cases have required hospitalization, with 56 requiring ICU treatment, and 32 needing ventilators.

As of March 26, there have been 16 deaths in Pennsylvania. 68% of those are from adults over the age of 65. All deaths have been adults.

"We don't know when this will flatten," Levine explained.

Levine explained the distribution of supplies like PPE masks and gloves from the federal stockpile, and that they have also scoured the state for supplies as well.

As always, she pointed to the website Health.pa.gov, and repeated her mantra: "Stay calm, stay home, and stay safe."

Governor Wolf began by stressing the need for beds and ventilators, wary of the increasing demands on PA's healthcare infrastructure. He commended the PA State Legislature and their $50 million funding infusion poured into the state's healthcare system. Wolf thanked them as well as the federal government for moving quickly.

"We don't know how bad the surge will be, or when this pandemic will end, so we must prepare ourselves mentally and physically to be in this for the long haul," Wolf said. "We're not fighting a battle here, we're fighting a war," he warned.

The Governor assured that the commonwealth's unemployment department was working quickly to process the more than 650,000 unemployment claims that have been filed. He cited a projected 800k total new claims, stating that that would account for 10% of the United States' total claims.

He acknowledged the possibility to cancel all in-person classes for the remainder of the school year. "We'll continue to make sure that we're being fair to studs educators to make sure we keep all of them safe," Wolf explained.