Efficiency and pleasure? Pizza and ice cream? Fantasy and government? UPFRONT has a new game we can all play!

by Cory Vaillancourt
View ProfileFacebookTwitterGoogle+RSS Feed
May 9, 2012 at 12:35 PM 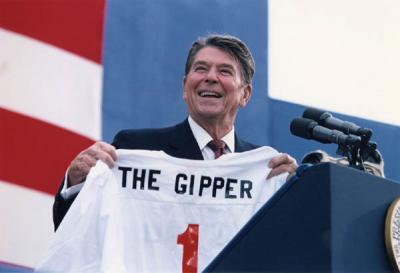 Over eons of evolutionary development, human beings have become naturally inclined to seek out efficiency. Those unlucky cavemen who were not so inclined often found themselves inundated with tiresome, time-consuming tasks; as a result, they had a tough time passing on their genes, considering the unending litany of caveman-type work they probably encountered – I'm thinking cooking brontosaurus burgers, rearranging big cave rocks, and domesticating saber-tooth tigers.

Human beings also have, over those eons of evolutionary development, become naturally inclined to seek out pleasure; those unlucky cavemen who were not so inclined often found themselves enshrouded in severe, untreatable pain; as a result, they had a tough time passing on their genes, considering the unending litany of caveman-type injuries they probably incurred – I'm thinking burnt hands from handling brontosaurus burgers, broken feet from dropping big cave rocks, and saber-tooth puncture wounds from trying to pet the big nice kitty.

I like pizza. I also like ice cream. Both of these things give me pleasure on some small level, but there is little efficiency. However, if we were to combine pizza and ice cream, the revolting concoction would be less pleasurable, albeit more efficient. Therefore, combining efficiency with pleasure is not always the best option. Some pleasures are savored best independent of other pleasures. Right?

Oh, to hell with it. It is our natural human inclination to seek both pleasure and efficiency, so I'm not going to fight it. In fact, I'm going to encourage it, no matter how revolting the ensuing concoction may be.

I like fantasy football. I also like following politics. As the product of eons of evolution, I have found it highly inefficient to like both of these things independently; so, to increase both efficiency and pleasure, I present to you the next revolting concoction in human evolutionary development:

That's right, it's the highly efficient dual pleasure of playing fantasy football and following politics at the same time! And I want you to play it with me.

Draft wisely though; just like fantasy football, you don't want to find yourself rooting against your favorite team; as a Bears fan, I've never been able to bring myself to draft Brett Favre or Aaron Rodgers, nor the Green Bay defense. This has hurt me in the past, points-wise, but I have a moral opposition to the Pack's very existence. So, if you're a Democrat, don't draft Congressman Mile Kelly. Republicans, ditto for Erie Mayor Joe Sinnott. You also want to be sure that you don't work against yourself – because that would be inefficient – by playing your quarterback against your defense, i.e. drafting County Councilman Ebert Beeman and County Councilman Whitey Cleaver, because no matter their individual performances, your win will always be balanced against your loss, netting you zero points.

Drafting Ebert Beeman may not be a good option anyway – he's probably going to be subject to disciplinary action by the league, er, the County Council, and may not finish out his season, er, term. For example, if you were to have drafted City Councilman Joe Schember, you're currently out of luck – he unexpectedly resigned yesterday, underscoring your need to draft a deep bench. You've got to watch out for those types of situations – players tainted with off-the-field problems, or players not known for their reliability – because your players can't score points if they're not on the field.

What do you think? Would you play fantasy government with me? This idea isn't fully formed yet, so I'm open to suggestions on scoring, rosters, and, of course, league fees – because I like fantasy football, and I like following politics, so I combined them into fantasy government, but  I also like gambling, and combining them would be an efficient, if not revolting concoction.