Upfront: Another Brick From The Wall

by Cory Vaillancourt
View ProfileFacebookTwitterGoogle+RSS Feed
June 11, 2014 at 6:35 AM 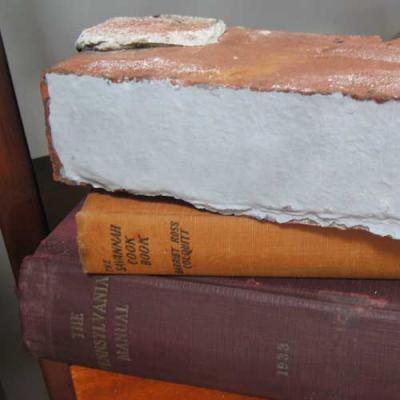 A few weeks ago, using my Spanish skills and my dollar bills, I was able to walk away with an armload of bricks from the Janes Mansion, which is now consigned but to memory and dusty dog-eared photographs.

Each of those bricks has at least one side slathered in that ghastly blue – ghastly, but iconic nonetheless. Long story short, I've only got one left, but those bricks are all that really remain of the place, as far as I know.

One thing I do know is that I'm no more an architect or lawyer than I am urban planner or economist. I'm not qualified to speak much about the building's significant style, or the legality of the quickie demolition, or the zoning restrictions, or the financial impact of the undignified parking lots that will soon take the place she held for a hundred-something years.

I'm not qualified to speak on those things, but I am a human being who is alive in the built environment, and I can't stand by and watch Erie continue to commit aesthetic suicide any more.

For far too long, we've relied on the intelligence and foresight of legislators and the goodwill and charity of capitalists to preserve the historic legacy of Erie; and now we have parking lots. Lots and lots of lots. We might as well start a nonprofit called "PaveErie" and just get it over with already, because no one can take my brick back and rebuild.

Taman Shud. It is done.

We – me and people like me, who aren't necessarily preservationists but are human beings alive in the built environment – need to do something to stop this from happening again. Because doing nothing hasn't worked so far.

And since legislating away the private property rights of landowners is as ludicrous as asking them to conform to our aesthetic  — out of their own pockets, mind you  —  the only option left is to get some skin in the game.

The Historic Savannah Foundation was founded in Savannah, Ga. by seven little ol' southern belles in 1955 after a string of historically and architecturally significant buildings suddenly became parking lots.

Spurred into action by the impending demolition of the Isaiah Davenport House (built around 1820) these pioneering women did the only thing they could do – they bought the place.

Since that time, what came to be known as the Historic Savannah Foundation has gone from putting out fires to preventing them altogether. They've grown into a robust, award-winning, nationally-known local preservation nonprofit organization that has raised millions upon millions of dollars and saved more than 350 irreplaceable structures over the past 59 years.

The effect these seven women had on Savannah has been noticeable in more ways than one; what started as a desire simply to preserve the history and beauty of the built environment inadvertently led to it becoming a routine winner of "America's Most Beautiful City" polls and a major tourist destination.

Destinations = dollars, people. Lots and lots of lots do not.

Granted, these seven women were women of means, and splitting a $150,000 building between six other people is out of reach for most of us. But not all of us.

As I alluded to before, there's this thing called the Internet, and crowdfunding is but one avenue available today that was not in 1955. And while I couldn't possibly think of donating $21,248.57 (one-seventh the cost of that metaphorical $150,000 building) to a nonprofit, I could donate $214.28 (one seven-hundredth the cost of that building) to save something as historic and important as the Erie Estate Buyers building on Parade Street. And if just 699 people felt likewise, well, then we'd have something, wouldn't we?

Yes. We'd have an absolute treasure with three levels of wood flooring and plastered corners and our own gas well in a neighborhood that needs all the help it can get. And we'd clean it up and rent it out as office space, or performance space, or whatever space, and we'd fix it up and once it took root, we'd sell it to someone who'd continue to devote the loving care to it that we had, and then we'd use the money to do the same thing. Again, and again, and onward ad infinitum.

Sorry, that was my John Steinbeck "Tell me about the rabbits, George" moment. I don't know if that particular building has a date for the demolition ball, but as you can see, I'm excited about the creation of an HSF-style revolving fund in Erie, because that bulding just might have to go to that dance alone. And if it doesn't, another historic building surely will.

We live in a city that has one of the most vibrant nonprofit communities in the entire Commonwealth; Erie is one of the most charitable and giving communities I have ever been a part of, which is what allows those nonprofits to exist. With Erie's nonprofit know-how and the generosity of people whose causes range from kitty-cats to cancer cures, is there anyone in this community willing to step up and make this happen? If so, let me know. I'll give them my brick so they can start building.