by Cory Vaillancourt
View ProfileFacebookTwitterGoogle+RSS Feed
July 15, 2011 at 12:00 AM 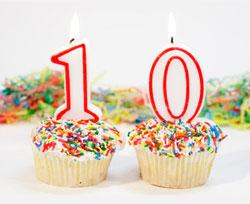 Today marks the 10th anniversary of Upfront. That's right, 10 long years I've been writing this column- actually weeks, but whatever- and I want to thank you all for sticking with me. If you didn't read this, they wouldn't pay me to write it, so thanks again for your loyalty. It really means a lot to me. I was thinking about doing something really monumental to commemorate our anniversary, you know, a little something for you and me, however I am feeling awfully lazy this week, so I am going to basically just phone this one in. Below, we will revisit each of the nine previous Upfront columns, and give you the lowdown on any new developments. Yes, dear Reader readers, you are about to be subject to the literary equivalent of a clip show, or, a column about a column. That's your reward for sticking with me these 10 long weeks. Thanks again.

Last week, Hamlet, Horatio, and some clown talked about the closing of Senor Coyote's on State Street. As of last report, it is still closed. The second failed restaurant in the same space in less than five years, Senor Coyote's swift and unannounced demise makes one wonder who or what will occupy that space next, methinks.

The week before last, it was Crap Rock. Upfront heard a lot of noise on that one, almost all positive; however, I've been getting yelled at an awful lot, both in public and in private. And that is just by ER's music bureau. One lady wrote to me disagreeing with my assessment of the headliner's music, so I offered to buy her a beer and meet her at the show to discuss it. She agreed, but I think we should expand it just a bit. Let's have our own beer summit at Celibate Erie festival. We can sit together, share an open-container beer, and talk about our feelings.

The week before that, Upfront was on vacation and featured a maze. In case you missed it, it was pretty easy. Upfront knows it's demographic.

Before heading out on that vacation, Upfront talked about the medical marijuana debate in Pennsylvania. Since then, absolutely nothing has transpired in regards to SB 1003, although its brother bill, House Bill 1653 has generated some movement. All this effort may be for naught, however, as Gov. Corbett has vowed to veto such measures. Of note is the title of HB 1653- the "Governor Raymond P. Shafer Compassionate Use Medical Marijuana Act." This former Governor of Pennsylvania was hand-picked by President Nixon in 1972 to chair the National Commission on Marijuana and Drug Abuse. Shafer's commission shocked Nixon when it issued a report supporting wholesale decriminalization of marijuana.

The column discussing Erie's open container ordinance (or lack thereof) generated lots of interest, and from what Upfront hears, the debate continues and has been enriched by the commencement of summer block party season. Of particular interest to many seems to be the supposed benefit to downtown businesses. But still, the question remains: do we, or do we not? No action has taken place on this other than the flapping of lips- Upfront has led the horse to water, now you've got to make him drink.

Speaking of downtown businesses, the column before the open container column was just another part of an ongoing discussion about the downtown business environment, exploring some of the issues Mark Toriski's in-depth pieceraised. While downtown may have lost Senor Coyote's, we are still eagerly awaiting Russ' new placein modern tool to fill that void. And that reminds me, I have not heard from Jason Lavery, of Lavery Brewing Company, in a while. I wonder how he is coming along with his new venture over on 12th Street.

Prior to that, it was election results. The 25 percent of you who did vote in the election probably read the column with great eagerness; the rest of you, not so much. Don't worry, there's another round of elections this fall.

Apparently it was a smart thing to hold those elections after all because the apocalypsethat I thought was going to take place, well, didn't. Fear not, true believers, there are several more scheduled over the course of the next 18 months. I'm sure they'll get it right one of these times.

And finally, just before Election Day, the very first Upfront was born! You should read it; I'm pretty sure you'll be the first person to do so.

Well, I certainly hope you've enjoyed this thrilling ride down memory lane. I'm glad you made it to the end of the piece, and as a reward, I'm going to give you a heretofore secret nugget of Upfront trivia that you can use to impress your friends at parties. Think of it as the Easter egg of this column, except it's not hidden, it's, well, up front. Heh heh. Sorry.

The first "Upfront" is not the first "Upfront." I know, it makes your head want to fracking explode if you think about it too much, so let me explain before that happens. This all started with a little piece I did on Gov. Corbett's fracking proposal, titled "Go Frack Yourself." While the "Upfront" title was supposed to run above that column, it was apparently omitted by some overworked child laborer at the Erie Reader's Dickensian printing-press sweatshop in Liverpool, England. The impudent waif, being Erie Reader property, was executed, fired, and then buried in the company cemetery for this oversight.