by Cory Vaillancourt
View ProfileFacebookTwitterGoogle+RSS Feed
October 30, 2013 at 8:03 AM 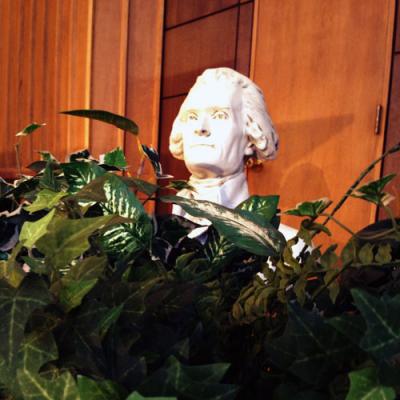 But first, a little background. Five men seek four seats on an Erie City Council that will most certainly face difficult times ahead. Incumbents David Brennan, John Evans, Curtis Jones, Jr., and Jim Winarski seek to retain their seats; City Treasurer "Kaz" Kwitowski hopes to displace one of them.

The five candidates took to their podiums on stage at the Jefferson Educational Society – under the watchful gaze of both Thomas Jefferson and WICU anchor and debate moderator Lisa Adams – and spent about an hour answering questions lovingly hand-crafted by the Erie Reader Editorial Board.

Over the course of that hour, I formed some assumptions about the men on stage. Personally, I think character and personality count for an awful lot in politics – as much or more than knowledge and experience – so I usually try to gather up the tiny fragments of body language, inflection, and demeanor unknowingly revealed by each candidate, and roll them into fist-sized Play-Doh-like balls, just to see what they look like. Here are those balls:

Jim Winarski: Although he began his opening statement by stating that he wasn't so good at speaking words in public and he blew through almost every stop sign the timekeeper gave him, Council President Winarski was loose, affable, and honest. He seemed to be the most authentic non-politician up there, and resembled that slightly goofy, good-natured uncle everyone seems to have in their family.

Curtis Jones, Jr.: Calm, measured, and thoughtful, Jones, Jr. was reserved and contemplative throughout the debate – until his closing statement, when he passionately talked about his marriage, his children, and being one of 14 children, 13 of whom still live in Erie. He was easily the most polished, and was clearly the most community-oriented candidate in the room.

John Evans: The only Republican on the stage, Evans played his role perfectly; professional and knowledgeable, he doled out a virtual alphabet soup of financial-industry acronyms that follow his name – MBA, CPA, CFP, CRPC, and probably several more that got lost in that soup. Obviously fiscally-minded, he currently chairs both the Finance and Audit Committee.

Casimir "Kaz" Kwitowski: If Winarski is your slightly-goofy, good-natured uncle, then City Treasurer "Kaz" Kwitowski is your slightly-goofy, good-natured grandfather. He shot straight, this one, and like any good grandfather, his answers relied on his experience for both precedents of progress and warnings of misadventure. Kwitowski was the only non-incumbent City Councilman.

David Brennan: Exuding a serious yet soothing demeanor, Brennan – who was trained as an architect – spoke with well-planned, well-structured responses in which he continually referenced the city's culture and overall aesthetic. He appeared confident in his sentiments, as much of the debate centered on topics squarely in his area of expertise – the built environment of Erie.

Now, the reason I compared these five candidates to fist-sized balls of Play-Doh isn't because they smelled funny (they didn't) or because they were accidentally ingested by a toddler (they weren't). It's because that from which a person is constituted determines their steadfastness as well as their malleability – and council will, at times, need both to succeed in navigating the challenges ahead.

You see, I think the mayor's budget – conveniently, to be released to the public more than two weeks after the election – holds a property tax increase, which would be anathema to everything Erie's supposed to be working towards. Here's why I think that – our third question of the night was as follows:

Every single candidate answered "no," because only a jackass would answer "yes."

Winarski: "No, I do not…I do want development down there that will stay on our tax rolls."

Jones, Jr.: "I'm not in support of a taxpayer subsidized hotel in this particular instance."

Evans: "I think we should use publicly-funded projects only in those instances when it's not possible for private enterprise."

Kwitowski: "No, I'm not in favor of a taxpayer-subsidized hotel, not when you have a gentleman not far outside Erie [Nick Scott] who wants to do it."

Brennan: "These types of projects need to be a public-private partnership. The answer is 'no.'"

The fourth question of the night was even more telling:

In your view, what is the best use for the GAF property, and what type of development should be the priority on Erie's Bayfront to benefit the entire community?"

Winarski: "Once again, it definitely needs to be on the tax rolls. We don't need too many things down there that we're not going to get tax dollars for."

Jones, Jr.: "I think we need to do everything we can to keep that property on the tax rolls."

Evans: "As I look at the Bayfront, I see three development opportunities for our community."

Kwitowski:  "We do need to keep that taxable."

Those paying attention probably caught it; some candidates inferred it, and some were more explicit, but all appeared especially concerned about Erie's diminishing tax rolls.

If I'm incorrect about the mayor's budget containing a tax increase, well, that's just fine with me. I've been wrong before, and would be more than pleased to be wrong in this instance.

However, if I'm right, and that budget asks Erieites to dig a little deeper into their pocketbooks, well, one of those fist-sized balls of Play-Doh will have to stand up and lead the fight for intelligent development and prudent fiscal management – both of which suggest that Erie's nascent Bayfront renaissance must remain on the tax rolls.