As breaking news sweeps through California, Upfront takes the time to weigh in on the topic of gay marriage.

by Cory Vaillancourt
View ProfileFacebookTwitterGoogle+RSS Feed
February 9, 2012 at 10:14 AM 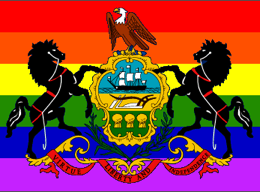 You might remember that two weeks ago we talked about the inevitable demise of "traditional" marriage in "The Marriage Contract," which may have inadvertently broken up several of my friends' marriages. That column was but the first of several attempts to fulfill my 2012 New Year's resolution, which is to savage all institutions precious to most Americans throughout the coming year. Yes, dear Reader readers, it's gonna be like that. Stay tuned.

Accordingly, I'm not done savaging the institution of marriage just yet. Last issue, it was traditional marriage, which, despite the name, no longer includes a man dragging his woman back to his cave by her hair, proving her virginity at the altar under penalty of death, or haggling with her father over the number of goats she is actually worth. This week, we're talking about gay marriage. In that column two weeks ago, we learned that nothing undermines traditional marriage like traditional divorce, and gay people who want to get married are certainly not undermining marriage by getting married – duh.

To be honest with you, my loyal Upfront readers, I'm going to come out of the closet, right here, right now, forever memorialized in black and white: I'm heterosexual. That's right: I'm out, and I'm proud. I'm here, I'm not queer, get used to it! I am most certainly not gay, and I don't want or need your approval as justification for my decadent and depraved lifestyle. I can unashamedly say that despite my recent divorce, I still loves the womern-folk, at least as much as they will let me.

Now, it is true, I've never tried being gay, but it seems to me to be one of those things I don't have to try to know I'm not interested in it – like eating chocolate-covered locusts. And from what I'm told, it's not actually a choice, to be gay; it's hard for me to believe that any person would wake up one day and confidently proclaim to themself in the mirror, "Self, I want to sign up for something that may ostracize me from my friends, my family, and my faith, diminish the rights I'm otherwise entitled to by my Creator, and diminish the rights I'm otherwise entitled to by my government, all the while putting me at constant risk for a Matthew Sheppard-style murder by bigoted meatheads. Yeah, that sounds great! I think I'll become gay now."

Nonetheless, I'm not revealing my sexuality to you in a defensive way – I just wanted to let you know where I'm coming from with this piece, so that you know I have no vested interest in this matter, or, rather, no more vested interest in this matter than any other American who demands this nation live up to the true meaning of its creed: that all men – and women – are created equal. According to the National Gay and Lesbian Task Force, 3 to 8 percent of America is gay – and to these people I say, good for you! This is a cold, cruel world, and wherever you may find true love, I say, seek it out and embrace it, for it is truly beautiful and exceptionally rare. If two people who truly love each other want to get married, I say, let them.

But before you go thinking that gays getting married will be all rainbows and unicorns, refer back to my article on the marriage contract; if gay marriage is anything like traditional marriage, at least 50 percent of gay marriages will end up as gay divorces. Can you imagine how much drama would be involved in a gay divorce? This is why I continue to advocate for a renewable marriage contract that is not a lifetime commitment. Sign a two-year deal, and see how it goes before you do anything stupid like pledge lifetime loyalty to someone who, more than likely, is just going to chew you up and spit you out like a piece of Doublemint once you've lost your flavor.

So, again, gay marriage is not for me, but it's not my business what anyone else does, as long as it does not interfere with my pursuit of happiness or endanger others. And it doesn't do either of those things. In fact, homosexuality actually furthers my pursuit of happiness, because as a single heterosexual male, I realize that the fewer intelligent, articulate, well-groomed men with good fashion sense in the dating pool, the better. Thank you, gay men of the world! I want you all to get married, immediately.

Believe it or not, I was once opposed to gay marriage – but then I found out that it wasn't mandatory; you see, I was told by Fox News or some other "reputable" news source that gay marriage meant that I would have to marry a gay man. So I said to myself, "Dammit, self, I'll move to Canada before I have to do that!" Then I learned that indeed it was not mandatory, but rather elective, just like "traditional" marriage; also, I decided to stop talking to myself because it makes one look craaaazy.

In all seriousness, I have plenty of gay friends, and honestly, I think about  their sexuality about as often as I think about quitting smoking – roughly once per decade. I'm tired of hearing about gay marriage, and gay people. I really am. Don't we, as a nation, have more important things to worry about than what two consenting adults do in the privacy of their own bedrooms? Jobs, Iran, global warming, national debt, the Kardashians, the Mayans, Uggs, K-pop, and Thomas Kinkade, anyone? All of these things are a pox on all our houses. They are; so why should anyone care about what is between your legs, what color it is, or whom you use it on? I can't for the life of me figure out how I will soon explain to my 4-year-old daughter why some of my friends (and hers) should be denied the same rights and freedoms that I enjoy simply because of the way they were born. Oh wait, I can imagine such a scenario – it was called segregation, and it involved black folks instead of gays. It was wrong then, it is wrong now, and it will never work in any civilized society. And we are a civilized society, right, America? Right? Your hesitant agreement troubles me, America. For shame.