Iraq, Swedes, and the bottom of the ocean. Upfront is making some unsubstantiated generalizations.

by Cory Vaillancourt
View ProfileFacebookTwitterGoogle+RSS Feed
July 18, 2012 at 9:36 AM 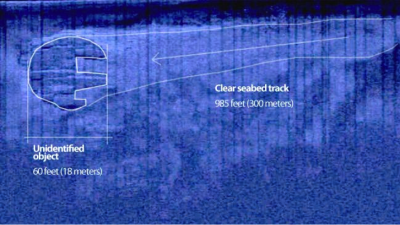 Ever notice how "a rock" sounds like "Iraq?" Actually, Americans pronounce it wrong – the British say "Irr-awk," which rhymes with hawk. But that's not important right now.

What is important right now is that there are multiple Swedes almost 300 feet below the surface of the Baltic Sea, shining their little lights on a deep, dark mystery. In June of 2011, a Swede with the very Swedish name of Peter Lindberg was sailing about, as is his custom. You see, Peter Lindberg is not only a Swede, but a groovy treasure hunting Swede at that.

This Peter Lindberg is good at sailing about and being a Swedish treasure hunter; back in 1997, he discovered the wreck of the Swedish schooner Jonkoping, built in 1896 and sunk in 1916, to the dismay of many Russians. You see, the Jonkoping – Swedish for "Booze Cruise" [citation needed] – was loaded with 4,400 bottles of champagne, 67 barrels of Cognac, and 17 barrels of wine, all intended for Russian Army officers.

Sadly, a ruthless German submarine commander with no respect for fine alcohol sank her.

Lindberg claimed the salvage rights to the wreck and eventually recovered more than 2,000 bottles of 1907 Heidesieck  "Gout Americain" champagne from the Jonkoping, worth about $8 million.

Sadly, the Cognac did not survive; there has been no word on the fate of the wine.

Anyhow, as Lindberg did sail about last summer, scanning the ocean floor, seeking solids by shooting sound through the sea, he stumbled upon a groove.

This groove was but a sole groove, and not a Groove Armada; additionally, the Groove was, sadly, not in his heart; it was carved into the floor of the Gulf of Bothnia, and it was huge. Accustomed to finding free cases of vintage booze practically begging to be taken – as well as sleeping on  a pile of supermodels and eating meatballs made of pure gold – Peter Lindberg, Swede and treasure hunter, was intrigued by this Groove.

And who wouldn't be? It is, after all, 985 feet long and 60 feet wide. It is undoubtedly an impressive groove, but its most remarkable feature is the 60 foot-wide, 12-foot tall disc-like object perched upon the ocean floor at the end of the groove.

Yes, I know what you're thinking. I'm thinking that, too.

This leads us to the startling revelation that the Star Wars series of movies belongs not in the sci-fi genre, but rather the documentary genre; even more startlingly, this can only mean that George Lucas is a space alien robot – just like Ann Coulter, Bob Dole, and Lee Perry.

But until Peter Lindberg, Swedish treasure hunter, and his team of divers actually reach this object and tell us if it's drinkable alcohol or not, we're just  going to have to go ahead and assume that he's discovered the Millennium Falcon at the bottom of the ocean, because unsubstantiated generalizations based upon flimsy evidence are awesome. However, a number of pertinent questions remain, namely: Was the Star Wars story foisted upon unknowing Earthlings to prepare us for the inevitable announcement that aliens are real?

What course of events transpired that resulted in Han and Chewie visiting this insignificant cosmic backwater in the ship that made the Kessel Run in 12 parsecs only to find a watery grave?

Will our discovery of the Millennium Falcon incite some interstellar chain of events far beyond our comprehension, events space alien robot George Lucas has been cunningly planning in Machavellian fashion to suit his evil space alien robot desires?

Or is it just a rock?