UPFRONT: Getting All Fourth on Ya?

by Cory Vaillancourt
View ProfileFacebookTwitterGoogle+RSS Feed
July 4, 2012 at 9:40 AM 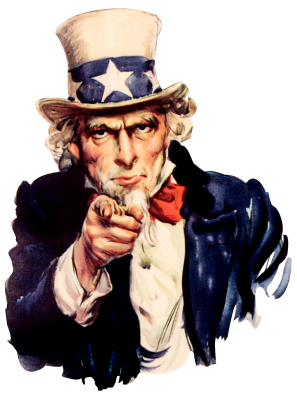 Long ago, I learned that the subject of history is a lot like the subject of mathematics. Sure, they're polar opposites in terms of subject matter, but they do have one thing in common – people either love those subjects, or hate them; there is little in-betweenery.

I believe this to be true because both subjects are taught wrong in our nation's schools. Take math, for example. You have to sit through a 50-minute lecture, all dry and boring, while biting the inside of your cheek to keep yourself from dozing off and falling out of your chair right in front of that girl you like, and then you're rewarded with 60 homework problems that will take you anywhere from six to 10 hours to complete. By the time you actually finish that assignment, you're right back in the ol' boring chair, inventing ways to yawn with your mouth closed.

History is little different than math, academically; it's taught wrong. The unhealthy fixation on dates repulses most people and draws attention away from the true significance of the eras and events that are more important. To the surprise of approximately nobody, a national study conducted by the National Center for Education Statistics last summer showed that just 12 percent of high school seniors were able to demonstrate proficiency in History.

Let's face it; most of us – myself included – are terrible with remembering important dates like anniversaries, birthdays, and underwear-changing days. In fact, I just found out the other day that it's no longer 2009. Seriously. But today, July 4, 2010, marks the 234th anniversary of that one time when America declared her independence from Great Britain by tendering a document appropriately and accurately titled "The Declaration of Independence."

For those who are not familiar with what, exactly, that means – all 88 percent of you – I'm going to  break it down right quick-like; but have no fear, dear Reader reader, I'm not going to bog you down with insignificant dates, as you're probably still wondering if you changed your underwear last week or not. I'm going to talk right down to Earth in a language that everybody here can easily understand.

Think of it as a breakup. The worst breakup ever, like that couple that fights out in public at the roller rink and makes it all awkward for everybody else.

They were straight up in love. The bestest love ever, like that couple that makes out in public at the mall and makes it all awkward for everybody.

So, US and GB had been together for some time, and everything seemed rosy for a while, but eventually, their relationship soured; GB began actin' all crazy. Sadly, US felt like GB never listened, and GB made unreasonable demands of US without considering how US felt about those demands.

So US texted GB a long list of all the things GB did wrong in their relationship – the Declaration of Independence. US was sad to have to do this, but US thought that it was really the best thing for both parties. So US changed their Facebook status to "separated."

Imagine how mad you would be if you found out you were getting divorced through Facebook; long story short, GB wasn't havin' it. GB went all psycho and came over to US's house with a bunch of their friends. US, who by this time had started secretly sexting with France (who we'll call FR from here on out) was more than ready to scrap, so then US and FR were all like, "Come at me bro," to GB because US grew up in a rough hood and knew how to bring the cray cray.

A knock-down, drag-out domestic dispute ensued, and the cops were nowhere to be found on US's block, because, as reality TV star Flavor Flav once said, "911 is a joke."

So GB came over to US's crib and started throwing things – artillery shells – and it got all ratchet up in there, for real though.

Shockingly – LOL – GB couldn't convince US to take them back after actin' up and whatnot, so GB went home and was tryna tell everybody that they never really wanted US back anyway and that US was stupid and ugly and fat and a skanky ho and would never find another true love and would die all alone with a bunch of cats in a urine-scented trailer.

But US didn't care; US didn't give a honey-badger about GB, because US learned to love US, and didn't need GB's approval to feel like they were special. US was happy, alone, and making new friends quickly.

Unfortunately GB was still smoldering and soon became a creeper. In the coming years, everywhere US went, GB was there. Lurking. Leering. Threatening, even. Soon, the creepiness intensified, as GB pulled out every old trick in the book to harass, harangue, and harry US: GB tried to be US's friend on Facebook again, but kept commenting inappropriately; GB tried to get their friends – Tecumseh and the Iroquois - to hate US; GB tried to get US's friends to hate US, too; GB even keyed US's car in the bar parking lot and then egged US's house. Not cool. US looked into getting a PFA.

Finally, after years of stalking, GB and US went at it again – during the War of 1812. This was when Commodore Oliver Hazard Perry (who we'll call OHP from here on out) pimp-slapped GB once and for all, right in front of GB's new love, Canada (who we'll call CA from here on out). You see, OHP – who was 10 feet tall and once killed a whale with his bare hands – single-handedly served the divorce papers on GB near Put-in-Bay, Ohio, during the Battle of Lake Erie. CA stood there laughing in light of GB's newfound weakness – or should I say whackness; it wouldn't be long until CA, too, broke up with GB.

After that, things quieted down, and GB never bothered US again. In fact, GB and US did a collabo on a project back in 1914, and then again in 1940. Since then, they've been friends on Facebook and GB pretty much retweets everything US tweets, but not in that creeper way. GB even became friends with FR and CA, and they all lived happily ever after. The end.

For additional history lessons simplified and help with math homework: