This issue's Upfront tackles one of the "stupidest ideas birthed in Erie since the collar-bomb."

by Cory Vaillancourt
View ProfileFacebookTwitterGoogle+RSS Feed
February 6, 2013 at 11:22 AM 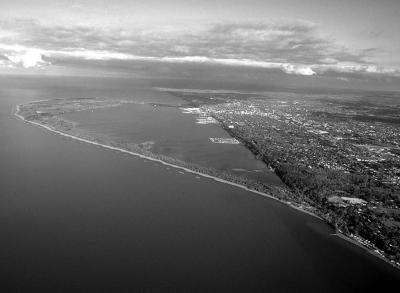 Presque Isle State Park is – as we Erieites already know – one of America's most unique geographic features and one of Pennsylvania's most popular state parks.

Comprised of almost five square miles of land, more than 21 miles of trails, and exactly 13 beaches, "PI" (as many locals call it) is also home to seven distinct ecological zones, which provide both safety and satiety to more endangered plant and animal species than any other comparably-sized area in the Commonwealth.

But if you were driving along West Eighth Street and Peninsula Drive, near Joe Root's Grill, you wouldn't even know it was there. The proverbial gateway to this inimitable, esteemed natural treasure is currently nondescript and unassuming. And that's a shame.

I think the entrance to Presque Isle State Park needs something more befitting of its status as the region's most outstanding, venerated physical feature.

I think the entrance to Presque Isle State Park needs a proverbial gateway or signpost that embodies all that we as Americans and Pennsylvanians hold dear.

I think the entrance to Presque Isle State Park needs some sort of monument that speaks to our respect for the natural world, something like…

That's right, the entrance to Presque Isle State Park needs a gas station – a garish atrocity bathed in an obnoxious fluorescent glow and adorned with a pendant of paper, plastic, and human trash, which literally spotlights our worship of and devotion to both consumerism, and petroleum, to the eternal detriment of nature.

And Sheetz, Inc., the Altoona-based chain of fossil-fuel purveyors, is more than eager to oblige by proposing a gaudy new red and yellow monstrosity to be located at the northwest corner of West Eighth Street and Penninsula Drive, on the southeastern edge of the parcel that currently hosts the El Patio Motel.

Now I don't know about you, but I fully support the notion, because nothing says "pristine and unspoiled wilderness" like "gas station."

Oh wait…no I don't. I'm full of Sheetz! I happen to think this is one of the stupidest ideas birthed in Erie since the collar-bomb.

Take a moment to think, very seriously, about how this gas station will change your life.

It's a balmy, sunny day – that first one of early spring. You can almost see the humidity from the snowmelt rising into the air, like a wet, wispy blanket of warmth, and you can almost feel the gentle southern wind that brings that subtle warmth and with it the satisfying scent of spring – that sickly-sweet wet grassy smell that lets you know that summer is not more than another snowstorm or two away.

So you do what every other person within 50 miles of the peninsula does, or wishes they were doing: you get your RPM's up and roll your windows down and head towards the peninsula. And as you sit in that car near Eighth and Peninsula, for what seems like forever, wasting precious daylight, you can almost smell that sickly-sweet wet grassy smell over the miles-long bumper-to-bumper line of cars spewing pollution all around you. You can almost feel that gentle southern wind, and you can almost see that wet, wispy blanket of humidity rising through the air. Almost – when you're not stuck concentrating on the "Keep honking! I'm reloading!" bumper sticker on the idling car in front of you, that is.

You see, at peak times, traffic and air pollution are already nightmarish at the entrance to the park, and if you think adding a gas station into the mix will help matters, you're as dumb as Sheetz.

But, you persevere. You make it past the gas station, crest the hill by the Tom Ridge Environmental Center, and pass under the roller coaster's bright blue metalwork that spans the roadway – because nothing says "pristine unspoiled wilderness" like "a roller coaster's bright blue metalwork" – you hit the bottom of the hill by Sara's, where you're blindsided by blizzard of plastic bags, gas receipts, Doritos bags, and Monster Energy Drink cans. You see, all this trash spawned at the top of the hill, by Sheetz, occupies the same space-time coordinates you do, for the very same reason you do – you were both prodded along by that sweet southern wind.

Again, you persevere. You try to make it out far enough on the peninsula, to where the litter has become slightly sparser, hoping to enjoy the waning sunshine as it throws off its own particular padparadscha palette over the deep blue waters of Lake Erie.

Unfortunately, your state park – your beach, your own special, private spot, that wipes away the day-to-day madness we all feel, the spot you always seek solace in because your grandmother showed you where it was all those years ago – is closed. Something about a fuel spill. After all, if those underground gasoline storage tanks up on the hill at the new Sheetz ever leak, that gasoline certainly isn't flowing uphill.

So you reluctantly turn around, and fight your way back up the hill, towards that omnipresent fluorescent glow cast upwards by the new addition to the top of the hill that obscures the stars and confounds the crescent moon, and as you sit there, in traffic, you start to wonder, "Why do I live in this town again?"