Arriving at a local conclusion on a contentious issue.

by Cory Vaillancourt
View ProfileFacebookTwitterGoogle+RSS Feed
October 2, 2013 at 7:35 AM 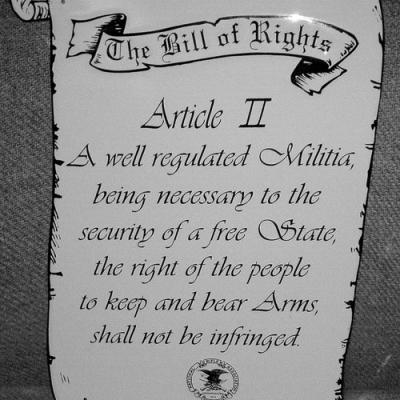 [Author's note: It's totally hilarious (read: totally not hilarious) that I wrote this column in the wake of the Newtown, Conn. school shooting last Christmastime and kept it lying around for 75 percent of a year. And it's hilarious (read: totally not hilarious) that as the DC Navy Yard shootings unfolded a few weeks ago, this particular piece again gained relevance. In short, each time a tragedy – such as the ones I just referenced – unfolds, we think it's the last time it will ever happen, because we, in our outrage and grief, have tied proverbial ribbons around our Facebook statuses denouncing violence, and saying "Enough is enough!" But it keeps happening. And it will keep happening, until serious measures are taken.]

Seeing as how I just celebrated yet another birthday, 40 is creeping up on me like a simile at the National Grammar Rodeo in Canada. But every time Republicans try to woo me with some good old American Honey, they leave me feeling like Ray Bolger doing a fireball shot with Ogre from "Revenge of the Nerds."

All that having been said, I've told you all before that I am a still a Democrat, albeit far from liberal; in fact, I've even gone so far as to say that I'd already be a Republican – a few years early, too! – if it weren't for a few termite-ridden planks in their increasingly rotten platform, including their virulent attitude towards any sort of responsible gun legislation at all.

Over the years I've arrived at a very complex, but very logical conclusion on this issue.

You see, guns are inanimate objects; they are no more or less evil than any other inanimate objects, like a hammers. However, guns do indeed enable humans to engage in a particular type of mischief not usually attributable to most hammers – instantaneously fatal ranged assault.

In an ideal world, there are no guns. Not "a bunch." Not "several." Not "a few." And certainly not "a couple." None. Not even one. If there is even one, well, the owner of that gun would have a tremendous and tyrannical advantage over everyone else, wouldn't they? So there can be no guns in an ideal world.

As you may have noticed, we do not live in an ideal world.

According to the Small Arms Survey – "the principal international source of public information on all aspects of small arms and armed violence," – there are an estimated 875 million firearms in existence. Can you imagine the practicality of rendering inoperable every single one of them to achieve this ideal world? As of press time there were 196 countries in the world, give or take. Even if each country could locate, seize, document, destroy, and dispose of 100 guns an hour, 24 hours a day, seven days a week, 365 days a year, it would take more than five years of house-to-house warfare and blood flowing like Mill Creek on August 3, 1915 to eradicate them all.

And what of those gweedy gubbament gun-grabbers? They'll need gubbament guns to come and grab your guns with, right? What happens when the gubbament is finished grabbing all the guns?

They'll freely turn their gubbament guns in, too (see "no guns in an ideal world," above)!

This will be a remarkable day, as it will be the first day in recorded history upon which a powerful group willingly relinquished power to a less powerful group.

Simply put, it's not going to happen, because this is not a black and white world – it's like, grey and orange or something. So all you Republicans who cry like Chicken Little every time even the slightest bit of common-sense gun legislation becomes but a palpitation in some liberal's bleeding heart – stop it. It makes you look crazy, like Ted Nugent-crazy. Eradication all of the guns in the world is about as conceivable as a Republican mayor in Erie.

Besides, Republicans, if you're like me – and I think you are – we're on the same team here. Much like many of you, I think gun-owning adults of sound mind and sound body should be trained, licensed, and insured – just like drivers.

How did I arrive at this conclusion after stating earlier that an ideal world contains no guns? It's simple, really. It's not an ideal world, and it never will be. Eliminating the existence of all guns is pure fantasy, just as the current system of piecemeal restriction is pure fallacy. The only alternative is for everyone to own one. I know this saying might be trite, but it is true – only a good guy (or gal) with a gun can stop a bad guy (or gal) with a gun.

So until we live in that ideal world (read: never gonna happen) let's get more guns into the hands of trained, licensed, and insured good guys (and gals). Republicans, here's your chance to show us all that you have both a brain and a heart. So c'mon, Republicans, woo me.