There weren't any togas, sandals, or palm wine, but the Greeks still would have been proud!

by Cory Vaillancourt
View ProfileFacebookTwitterGoogle+RSS Feed
February 15, 2012 at 10:30 AM 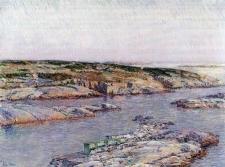 If you missed it, there was a public forum held last week at the Jefferson Educational Society; this forum hearkened back to the very roots of our democracy in Athens millennia ago, and I think the ancient Greeks would have been proud of us, despite their disgust at the distinct lack of togas, sandals, and palm wine.

Erie County Executive Barry Grossman appeared alongside Erie Art Museum Director John Vanco to discuss the pro's and con's of selling "Summer Afternoon, Isle of Shoals" by American Impressionist Childe Hassam. On one hand, as Grossman stated, it is undeniable that the county has some financial problems. On the other hand, as Vanco stated, selling the painting is probably a knee-jerk reaction to the problem. In accordance with their stated mission as a "think tank," the JES advanced no particular agenda as they allowed these two men, a Demosthenes and a Cicero, to lay out their respective cases. Nevertheless, I think most people in attendance appreciated the frank and civil discourse between these two men who stand at the forefront of a contentious community issue; hats off to Grossman, Vanco, and the JES for elevating the level of American political discourse from the partisan gutter-dwelling shout-mouthed swine over at Fox News and MSNBC.

I'm going to go ahead and agree with Vanco on this one. I do not think that things are that bad that the county needs to start pawning assets to pay the bills; if we're both wrong about that, selling this painting is certainly an answer, but probably not the best answer. Grossman is correct though – something needs to change with regard to the county's precarious financial position.

But something struck me as odd about this event. Then, going back in my mind, through all the coverage the Erie Reader has ever given this topic, it finally hit me. As I looked around the room at the JES, at the enthusiastic, elderly, well-fed crowd, I suddenly realized that not two blocks from where I sat there were younger folks who had lost jobs, lost desires, lost dreams, and lost hope. The people who care about the Hassam – one way or the other – care for just one reason: they can afford to care.

In fact, I bet that if you walked around the cobbled streets of the city-state of Erie and asked people: "What do you think of the Hassam?" the top two responses would be, "Are they hiring?" and "Is it edible?"

Even the ancient Greeks know the answer to that question.